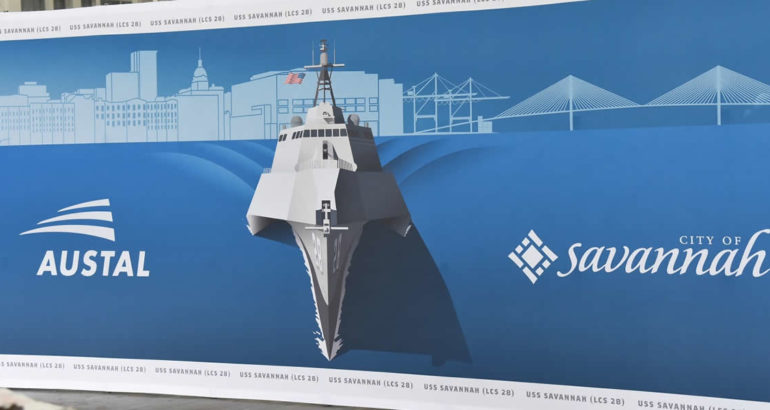 A small audience of dignitaries celebrated the christening of the future USS Savannah (LCS 28) on 29 August at Austal’s advanced ship manufacturing facility. Savannah is the 14th of 19 small surface combatants Austal USA has under contract with the U.S. Navy.

“Austal is honored to christen today what will be the sixth Navy ship named after the great city of Savannah. Savannah and Mobile have much in common both being major U.S. shipping ports but we also share the distinction of being cities where the infamous World War II Liberty ships were built. These were the last Navy ships built in Mobile prior to the littoral combat ships we are building here now.

“Manufacturing complex small surface combatants efficiently at the fast pace we have established is no small feat,” explained Perciavalle. “We have one of the most talented manufacturing workforces employed today and I am proud to work side-by-side with each and every member of our awesome team as we christen the 25th surface ship since 2011.”

The ship’s sponsor, Dianne Isakson, is the daughter of a World War II naval aviator and sister to two brothers who both served in the Navy. A graduate of the University of Georgia, Isakson is married to the Honorable Johnny Isakson, former U.S. Senator from Georgia. Dianne is active in community and volunteer organizations and boards. She took up watercolor painting late in life and has been fortunate to be able to show and sell her paintings through two art galleries in Georgia.  After raising three children, she now enjoys the time she spends with her nine grandchildren.

“We are honored to host Mrs. Isakson as the ship’s sponsor,” continued Perciavalle. “Her ties to the Navy through her father and brothers along with the time she has committed to raising a family and supporting her husband, U.S. Sen. Johnny Isakson, is commendable and makes her the perfect choice as sponsor of this awesome combat ship.”

The Independence-variant littoral combat ship (LCS) is the most recent step in the small surface combatant evolution. A high-speed, agile, shallow draft, focused-mission surface combatant, the LCS is designed to conduct surface warfare, anti-submarine warfare, and mine countermeasures missions in the littoral near-shore region, while also possessing the capability for deep-water operations. With its open-architecture design, the LCS can support modular weapons, sensor systems and a variety of manned and unmanned vehicles to capture and sustain littoral maritime supremacy.

In addition to being in full-rate production for the LCS program, Austal USA is also the Navy’s prime contractor for the Expeditionary Fast Transport (EPF) program. Austal has delivered 12 EPF, with a total of 14 under contract. Austal USA is also leading the evolution of connector and auxiliary ships as Austal EPF designs for dedicated medical, maintenance, logistics, and command and control ships continue to impress fleet commanders.