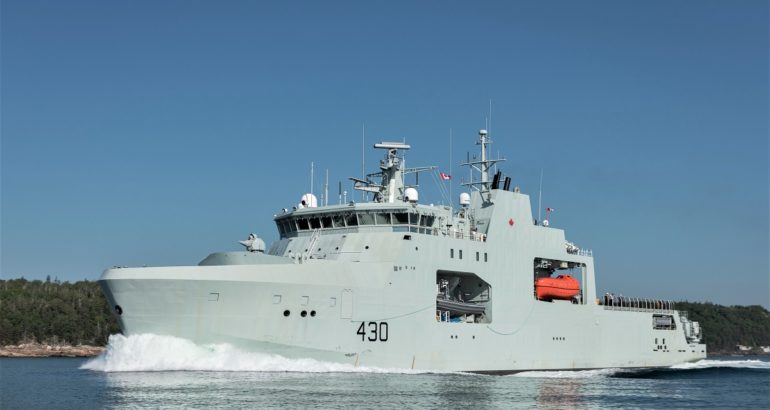 HMCS Harry DeWolf, the first of six Arctic and Offshore Patrol Ship (AOPS), was delivered on 31 July to the Royal Canadian Navy (RCN).

The first-in-class ship is named in honour of Vice-Admiral Harry DeWolf, a Canadian wartime naval hero. HMCS Harry DeWolf is the first ship built for the RCN under the National Shipbuilding Strategy. Through Canada’s defence policy, Strong, Secure, Engaged, the Government of Canada is equipping the Royal Canadian Navy (RCN) with the modern and effective ships it needs to support expanded surveillance and defence activities across Canada’s three coasts.

Specifically designed to patrol Canada’s offshore waters and northernmost regions, this new AOPS class of ship will be at the core of an enhanced Canadian Armed Forces (CAF) Arctic presence, effectively complementing the capabilities of our other current and future warships through critical reconnaissance and surveillance activities. In addition to highly versatile platforms that will enable the ship to support a variety of domestic and international missions, its modern accommodations and facilities will also significantly improve the comfort and quality of life for its crew, underscoring the CAF’s commitment to improved inclusivity and well-being for personnel.

“Today, because of the hard work of the staff at Irving, we are receiving the first of Canada’s Arctic and Offshore Patrol Ships, HMCS Harry DeWolf. Since the announcement of our fully funded defence policy, Strong, Secure, Engaged, we have reached another milestone. By ensuring that our defence policy was fully funded, our sailors will have the confidence they will receive all of the ships outlined in the National Shipbuilding Strategy, including six AOPS for the Royal Canadian Navy. This milestone is important for our homegrown defence industry, for the Royal Canadian Navy, and for the protection of Canada. Every single worker at Irving has done incredible work to deliver these impressive ships to the Royal Canadian Navy. Thank you for everything you do to empower our people in uniform with the equipment and support they need to protect Canada, at home and abroad.”

“The delivery of HMCS Harry DeWolf, first of a class of six Arctic and Offshore Patrol Ships (AOPS), marks the beginning of an exciting time for the RCN – our future fleet is beginning to be delivered. These ships will be at the core of an enhanced Canadian Arctic presence, effectively complementing the capabilities of our other current and future warships through critical reconnaissance and surveillance operations. The Harry DeWolf-class will also be capable of a myriad of different mission sets including humanitarian assistance and disaster relief, tasks for which it is particularly well suited. Bravo Zulu and thank you to all of those across the Government-Industry shipbuilding team – especially Irving Shipbuilding Inc, the builder – whose collaboration has made Canada stronger today and welcome aboard to the ship’s company.”

HMCS Harry DeWolf will now undergo final preparations, outfitting and provisioning in HMC Dockyard Halifax while crewed by sailors before next proceeding to sea in the fall – for the first time under RCN command – in order to begin progressing navy-conducted tests and trials in a variety of environments in coming months as the ship’s capability is operationalized HMCS Harry DeWolf will be commissioned in mid-2020.

The AOPS project will provide the RCN with six new ice-capable ships, as well as two variants of the AOPS for the Canadian Coast Guard. Construction of the seventh and eighth ships is expected to begin in 2022 and 2023, respectively.

At 103 metres and 6,615 tonnes, HMCS Harry DeWolf is the largest Royal Canadian Navy ship built in Canada in 50 years. The vessels are built by Irving Shipbuilding’s Halifax Shipyard. The second ship of the class was launched in November 2019. The class is fitted with a Mk 38 Mod 2 25mm main gun by BAE Systems. Sensors include Terma SCANTER 6002 radar system and a Lockheed Martin Canada Combat Management System (CMS 330).