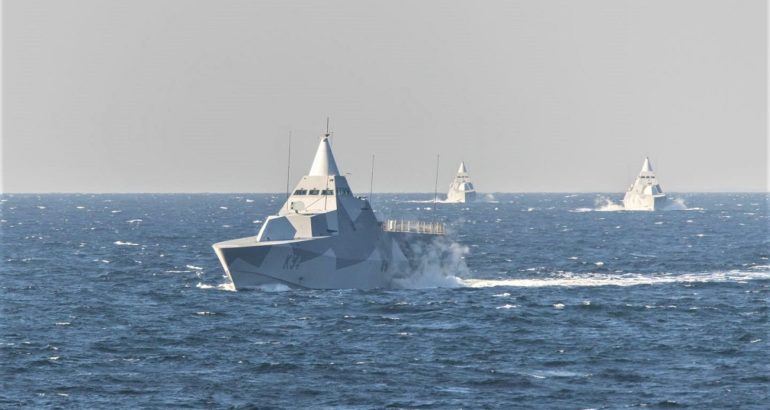 Over the next two weeks, the Swedish Navy will conduct air defense and surface combat drills in the Baltic Sea. The first part of the exercise is carried out between 24-27 August in the central Baltic Sea with a focus on air defense tasks.

With the help of target aircraft from Saab SFO, ships can train realistically with fast low-flying targets, something that places high demands on operators who often have a short time to detect and act against an incoming threat.

The exercise is part of the larger cooperation frame between Finnish and Swedish Navies with the aim to maintain the vessels’ interoperability and the capability of the vessels to serve as part of the Finnish-Swedish fleet troops. In the exercise formation the Finnish minelayer will technically operate as part of the Swedish troops but stays under the national lead of the Coastal Fleet. In this exercise there will be no participants from other countries.

The exercise will take place at sea, and minelayer Uusimaa will not moor in Sweden. There will not be any exchange of crew between vessels during the exercise. This exercise is preplanned among the other exercises between the two countries and it was accepted as an international exercise included in the 2020 programme by the Finnish Ministry of Defence.

Between 31 August and 3 September, a second phase focusing on naval surface warfare will be carried out in Hanö Bay. Three corvettes, a patrol vessel, two support vessels and helicopters from the Kallinge squadron are going to participate. The exercise will also involve about 250 people.