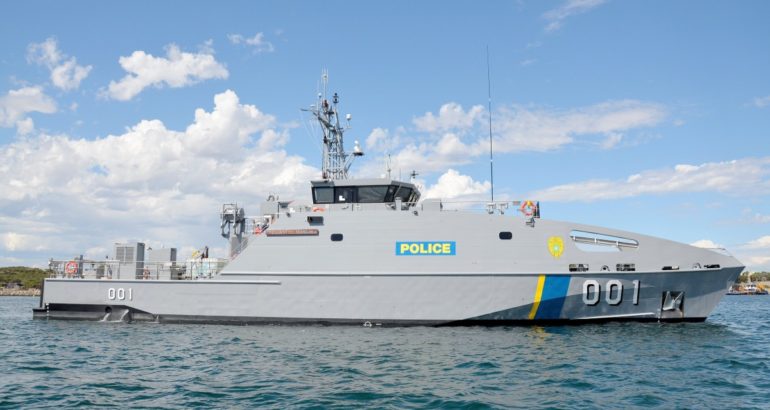 Austal Limited (Austal) is pleased to announce Austal Australia has delivered the seventh Guardian-class Patrol Boat (GCPB) to the Australian Department of Defence.

The vessel, PSS President H.I. Remeliik II, was today gifted by the Government of Australia to the Government of Palau during a handover ceremony at Austal Australia’s Henderson shipyard, attended by the Australian Minister for Defence Industry, the Hon. Melissa Price MP and RADM Wendy Malcolm, RAN, Head of Maritime Systems, Capability Acquisition and Sustainment Group.

Austal Chief Executive David Singleton said this Guardian-class Patrol Boat delivery was unique as it is the first to take place under COVID-19 restrictions, limiting the attendees at the ceremony.

“While we are indeed celebrating the delivery of this latest Guardian-class Patrol Boat, we are obviously missing the presence of a number of special guests we would normally have here, from both Palau and Canberra.

“We are fortunate, however, to be able to hand over this impressive new ship to the very proud and capable Palau crew, who have diligently observed all necessary COVID-19 safe protocols and procedures while completing a comprehensive training program that Austal provides, here in Western Australia.

“We send our warmest regards and congratulations to President Thomas Remengesau Jr, and the people of the Republic of Palau, on the handover of this impressive new ship,” Mr Singleton said.

Faster, with improved seakeeping, better amenities and an enhanced mission capability – including an integrated stern launch and recovery system – the Guardian-class Patrol Boat(s) provide the Palau Bureau of Maritime Security with a much improved naval asset to carry out border patrols, regional policing, search and rescue and many other operations domestically and internationally.

Austal’s service centre in Cairns is providing in-service support to the growing Guardian-class Patrol Boat fleet, with more than 40 people now employed in a variety of engineering and sustainment roles in the Far North Queensland city.

The PSS President H.I Remeliik II is replacing its namesake predecessor, a Pacific-class Patrol Boat that has been in service in Palau since 1996.

H I Sutton 08 Dec 2021
A Chinese government survey ship, Da Yang Hao, has been accused of illegal activities in ...