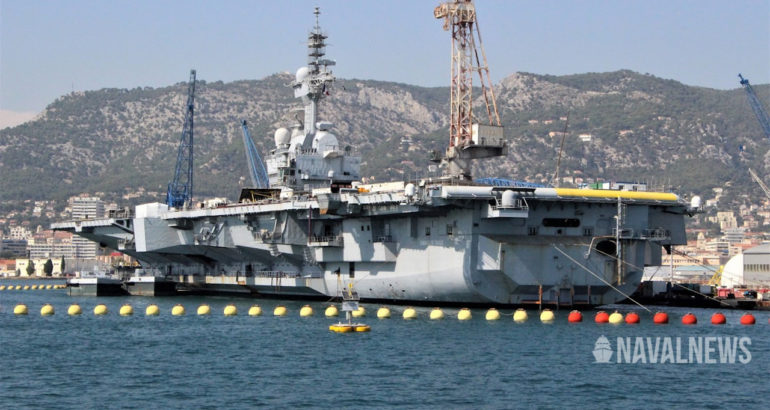 The "Charles de Gaulle" aircraft carrier during refit in Toulon in late July 2020.

Charles de Gaulle carrier back at sea after “COVID-19 adjustments”

The French Navy (Marine Nationale)'s Charles de Gaulle aircraft carrier received a number of health safety improvements this summer in order to make it more resilient to the COVID-19 epidemic, French minister of the armed forces said on Sunday. Hundreds of crewmembers tested positive back in April.

« Many lessons » have been learned from the management of the massive contamination, Florence Parly said on Sunday to French radio station Europe 1. « A number of works » have been carried out on the aircraft carrier in order to « improve health security on board », she added without detailing the adjustments.

As part of the technical overhaul that took place during the summer in the naval base of Toulon, « We took advantage of this downtime to accomplish a number of works. We cannot fundamentally change the design of the vessel, but we can improve health safety on board and that is what we have done, » the minister added.

For the record, the flagship of the French Navy was deployed in the North Atlantic earlier this year when a suspicion of COVID-19 outbreak aboard the aircraft carrier (40 suspected cases announced on April 8) prompted the Minister of the Armed Forces to order the early return of the Charles de Gaulle to its homeport. Four days later 50 sailors tested positive to COVID-19 of out the 66 total tests performed. In the end, over one third (1,046) of the carrier strike group sailors were tested positive.

The French Navy sole aircraft carrier will be back at sea in early September to perform regular post-refit tests and qualification of its airwing.