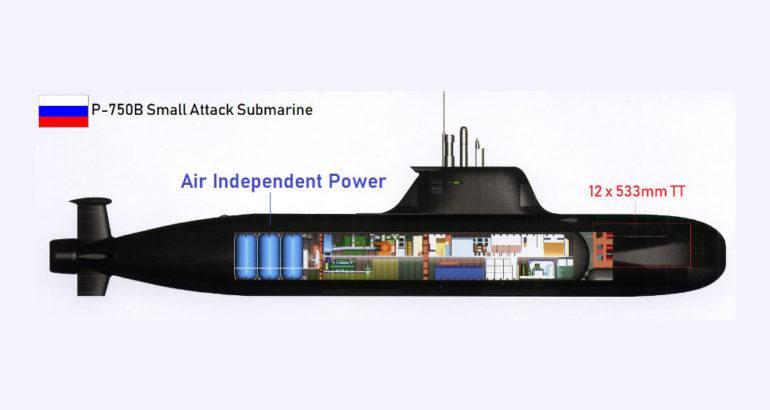 Illustration by H I Sutton / covertshores.com

P-750B is a small displacement multirole submarine for coastal operations. The main weapons include torpedo and cruise missile launchers. The sub will interact with unmanned underwater craft.

The innovative solutions include replaceable modular payload: weapons, self-defense means, groups of underwater propulsion means and unmanned vehicles. The payload will be carried outside the solid hull. The concept opens new capabilities, as the payload will change before the sortie according to the missions.

P-750B complements previous Malakhit designs of Piranha small coastal submarines (Piranha-M, Piranha-T, Piranha-T1, P-550E, P-650E and others) with a displacement of 220 — 1450 tons. They defend coastal and sea borders by covert patrol and destroy single warships and submarines by torpedoes. The submarines can lay mines and strike at coastal targets. They can engage in reconnaissance and provide guidance to the fleet and aviation. Some Piranha submarines can engage in special operations and carry 6-8 combat divers.

P-750B differs from P-650E by a longer cruising range without surfacing, a higher speed and powerful arms, including Kalibr missiles (CLUB-S export option).

Over 30 years ago, the Soviet Navy received MC-520 Piranha subversion submarine of project 865. It had a titanium hull and could operate in shallow and coastal waters at a depth of 10-200 meters. It could carry a pair of 400mm torpedoes or mines, however, the main mission was not related to strikes and mining of seaports. Piranha was designed to deliver combat swimmers with weapons and evacuate them after the mission.

The design began in 1974. The rough design was approved in 1981 and project documentation was finalized two years later. The construction began in 1984.

The 30-meter long submarine of project 865 had a displacement of 220 tons. The diesel generator of 160 KW and propulsion electric engine of 65 KW developed a speed of seven knots. Autonomous navigation was ten days and the cruising range was close to a thousand miles.

Besides a three-man crew, Piranha could carry six combat swimmers. They left the submarine through a docking chamber. The noise was decreased due to resin coating of the outside hull and the placement of the diesel generator, fans and compressors on a separate shock-absorbing platform.

Link to part 1 of this article