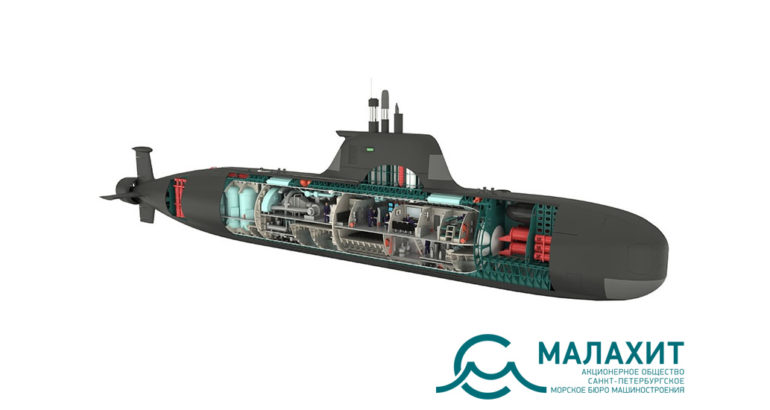 It is distinguished by more details than the submarine presented at the navy show in St. Petersburg last year. A part of the skin was withdrawn for the visitors to see the constructive specifics of the submarine and the changes introduced by Malakhit Design Bureau from July to December 2019 when the final concept was specified.

Serval P-750B has a displacement of 1400 tons and is equipped with an air-independent (anaerobic) power plant. It is a prospective submarine with numerous advanced solutions and technologies. The innovative approach of Malakhit manifested itself in the conceptual project completed in early 2020. 3D methods were used to calculate hydro dynamic characteristics and properly place equipment at an early state of the design.

Now it is necessary to specify the main technical solutions. Pipelines and cables are to be laid. 3D modeling will simplify the job. Construction materials, including metal alloys and composites are to be specified for the hull and the interior.

Serval is distinguished from all Russian non-nuclear subs by a gas turbine which replaced the classical diesel generator and a battery to power the electric engine. The idea is not new, but so far nobody succeeded to implement it although gas turbines are broadly used on surface warships.

The advantages of a gas turbine include its compact size, a high specific power and excellent acceleration rate. Modern gas turbines have a high resource. They are expensive in production, but can decrease life cycle costs.

Malakhit paid specific attention to safe operation. The power plant uses exhaust gasses enriched with oxygen instead of the atmospheric air. They are to be cooled and purified by the so-called Dewar vessels. P-750B power plant is rated as air-independent.

The submarine has a propulsion electric motor of 2500 HP (three-day underwater navigation with the battery) and a pair of diesel gas turbines of 450 KW each. They provide a speed of 10-12 knots.

The turbines operate in two regimes. The first one is for surfaced and the second one is for submerged position. The power plant consumes atmospheric air in the former case and liquid oxygen from cryogenic storage of Dewar vessels in the latter case. They freeze the exhaust gasses and there is no need to discharge them into the atmosphere. P-750B with a displacement of 1400 tons can sail 1200 miles underwater at an economical speed of four knots and maximum depth of 300 meters.

Link to part 2 of this article