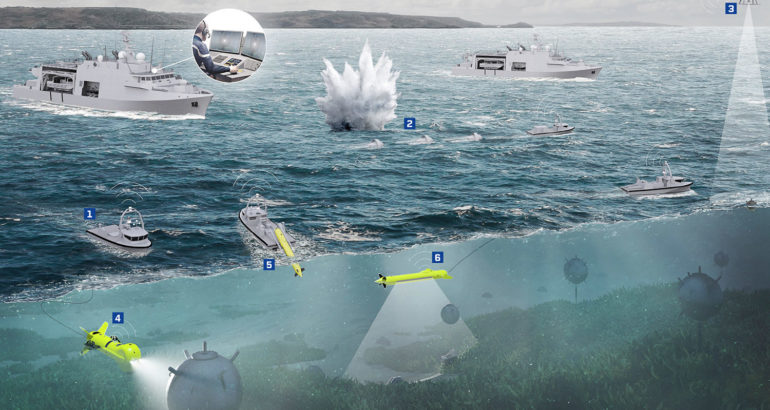 ECA Robotics, a French subsidiary of ECA Group, has recently signed a contract worth several hundred million euros. This contract comprises the outsourcing to its Belgian subsidiary ECA Robotics Belgium of the manufacturing and delivery of unmanned vehicles dedicated to the underwater mine counter measures as part of the renewal of the mine countermeasures capacity.

Belgium and the Netherlands have awarded the renewal programme to the consortium Belgium Naval & Robotics, set up by Naval Group and ECA Group. This programme consists of 12 new generation vessels (six for the Belgian Navy and six for the Royal Netherlands Navy) and containerized systems. It is the first programme that applies the stand-off concept by using a Toolbox. This Toolbox is comprised of several unmanned vehicles that operators can command and deploy from a safe distance in order to carry out autonomous mine clearance missions.

The contract that ECA Robotics France awards to ECA Robotics Belgium involves the manufacturing, supplying and delivery of the following products:

The unmanned vehicles will be manufactured in a new, very modern plant to be built in Ostend, Belgium. Building will start early 2021 so that production can commence in 2022.

The Belgian Ministry of Defense officially notified the consortium Belgian Naval & Robotics (formed by Naval Group & ECA Group) on May 22, 2019, a contract to supply 12 motherships and associated equipment to the Belgian and Dutch Navies.

Naval Group mothership has one port and one starboard LARS located slightly aft of midship, close to the ship’s centre of gravity. Each LARS consists of a pivoting A-Frame davit with the USV, weighing up to 18t, housed in a floating cradle. It allows the simultaneous launch of two USVs with maximal safety. For the Belgian-Dutch mine countermeasure (MCM) program, conducted by Belgium Naval Robotics – a Naval Group and ECA Group consortium -, they will be used to operate two ECA’s Inspector 125 USV.

The mothership itself, designed by Naval Group, is 82 meters long with a displacement of 2,500 tons and a crew complement of 30 sailors (total accommodation for 63 people). It is fitted with a Bofors 40Mk4 40m main gun system.