Home» News»“The U.S. Marine Corps has divested in their tanks” Well, what does that mean? 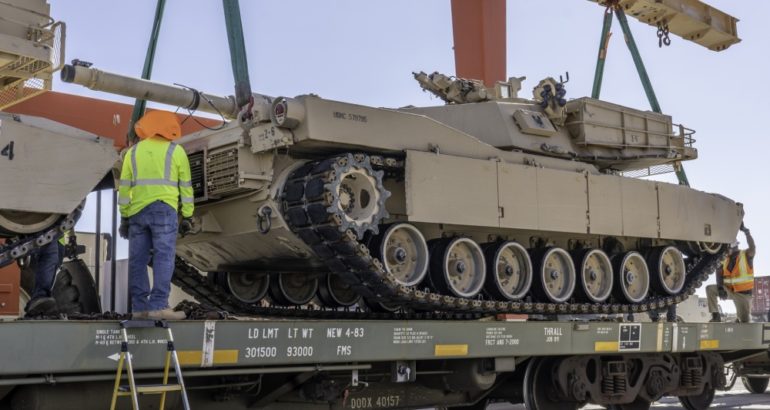 Marine Corps Logistics Base Barstow, June 7, 2020. RailOps transports divested tanks and other heavy equipment from the USMC to the U.S. Army. Photo by Sgt. Jack Adamyk

“The U.S. Marine Corps has divested in their tanks” Well, what does that mean?

General David H. Berger, Commandant of the U.S.M.C. explains where the Corps’ M1A1 tanks will go at Modern Day Marine 2020

Naval News reached out to General Dynamics Land Systems via email and a spokesperson replied:

“The SEPv3 Abrams Main Battle Tank is a robust U.S. Army program focused on providing warfighters with technologically advanced capabilities and strength that they need now to protect the Force and defend the United States and its allies. The SEPv3 program overview, including video and images of the new tank, is included in Land Systems’ virtual booth this year at MDM in order to showcase the range of innovative equipment and capabilities we provide to customers across our global business. Land Systems will be featuring other Abrams updates during the Army’s virtual AUSA meeting in October.”

According to GDLS’s virtual Modern Day Marine Expo Booth, the first 66.68-ton M1A2 SEPv3s were delivered to U.S. Army’s III Corps based at Fort Hood, Texas, in 2020.  The U.S. Marine Corps does not possess any M1A2s and operated the lighter and older M1A1 Abrams versions devoid of the M1A2’s 360-degree rotating Commander’s Independent Therman Viewer (CITV located to the front left of the turret) and the latest Depleted Uranium composite armor package on the front turret.  Four M1A1 MBTs often are deployed with each Marine Expeditionary Unit (MEU) and these four tanks provide the heavy armor and firepower of the MEU aboard Amphibious ships.

The U.S. Army’s M1A2 SEPv3 is enhanced with these features:

The U.S. Marine Corps Were Upgrading their M1A1s

According to MarineTimes, the Marine Corps were in the process of upgrading their M1A1s with:

Despite the impressive improvements, is theGDLS’s M1A2 SEPv3 that was delivered to the Army’s III Corps this year the right fit for Marine General Berger’s Force Design 2030 that seeks for a more mobile, lighter and smaller force that is also affordable?  Outside of deterrence, Berger said that the traditional, conventional view of a massive landing force used during World War Two and during the Korean War’s Inchon landing is too narrow-minded.

“Do we need that capability? Yes. Is it going to be two MEBs [Marine Expeditionary Brigades] landing across multiple beaches? Doubt it,”

Naval News asked the question about what will happen to the U.S.M.C.’s M1A1 MBTs at Modern Day Marine on Tuesday, September 22, and the Public Affairs answer was, “The Marine Corps has divested in their tanks.” “Divested” means to “get rid of,” and the Marine Corps appears to have done so, as Camp Pendleton deactivated and shipped off their tanks already in the Summer months of 2020. But where will the Marine Corps’ M1A1s go?  What will happen to those M1A1s?  And what will the Corps do without M1A1 MBTs?

Fortunately, General Berger explained the next day, Wednesday, September 23, at his Question and Answer virtual session.

“Army is huge. We need a big Army.  They win our wars.  The Marine Corps doesn’t win the wars; we win the battles.  They [the Army] have not resisted any of the changes to the Marine Corps, and me [the Commandant] and the Chief of Staff of the Army are working very closely to make sure our capabilities complement each other and not overlap on top of,”

“For example, all of the armor, the heavy armor, the M1s, our tank Battalions that we are divesting of, they’re going into the Army.  …The Army is pursuing longer-range, but much larger, heavier, bulkier systems than we are.  But they’re not either or; we’re going to need both [Army and USMC].  We have to be light and Expeditionary.  We need a big heavy, big lethal Army as well.  It has driven us to conversations were our capabilities have to be complementary,”

A Problem of Weight, Transport, and Logistics

According to TextronMarineSystems®, the U.S. Navy’s Landing Craft Air Cushion’s (LCAC) replacement, the Ship-to-Shore Connector (SSC), can transport 74-tons at 35 kts. (The LCAC can transport 60-tons normally, or 75 tons when overloaded). The Army’s M1A2 SEPv3 weighs in at 66.68-tons basic with no add-on kits (and the LCAC could carry it when operating overloaded) and the M1A2 SEPv3 can weigh in excess of 80-tons with the Tank Urban Survivability Kit (TUSK I or II configurations) and Trophy APS add-on kits installed, six tons more than the allowable on the SSC hovercraft and five tons more than the LCAC operating overloaded. A M1A2 SEPv3 with TUSK, Trophy APS, ballast, and field gear at 80+-tons fully kitted, leaves the Navy’s Landing Craft Utility (the LCU in has three variants), able to carry a 127-metric ton (137 ton) to 183-metric ton (201 ton) payload (or one or two Army M1A2 SEPv3s with TUSK and APS installed) as the only reasonable M1A2 SEPv3 weight-carrying landing craft transport to hit the beach. The main problem with using the LCUs is that it sails at a slow 8 to 11 knots despite its 1,200 nautical mile range. Essentially, the U.S. Army’s M1A2 SEPv3’s MBTs are too heavy with TUSK and APS to be carried via any U.S. Navy hovercraft. Without Force Design 2030, the U.S. Marine Corps will be stuck with using less effective and less protected M1A1 MBTs for the foreseeable future with only one U.S.M.C. M1A1 being able to be transported via Navy LCAC or SSC hovercraft.

Without MBTs, where and what tank options does that leave the U.S. Marine Corps in the 2020s and beyond?  The Commandant said that the M1A1s were going away; he didn’t say that tanks were not going to be a part of the Marine Corps’ future.  At MDM 2020, Berger talked about change to accommodate Force Design 2030’s plan:

“To get there we’re divesting Legacy equipment—older equipment that was well suited for what we needed 20 years ago.  And some newer equipment that was designed, developed 10-15 years ago but only now being fielded [e.g.: upgraded M1A1s] that may not be what we need for 2025 and 2030, and we’re using those savings, those resources to pour into the capabilities that we’re confident we’re going to need in the future [be]cause we’re building basically, tomorrow’s force with today’s resources.”

A plausible answer suitable to the Force Design 2030 concept would be the domestically-produced Mobile Protected Firepower (MPF) Light Tank Program, two competing tank contenders armed with a 105mm cannon, might be sufficiently light enough to carry on the Navy’s fast LCAC and SSC hovercrafts.  BAE System’s® M8 Armored Gun System and General Dynamics Land Systems’ “Griffin” weigh in at around 30-35-tons with add-on armor.  Two basic 30-ton 105mm MPFs can ride on a LCAC and two MPFs with add-on armor (35-tons) might be able to ride on an SSC.  With Active Protection Systems and Explosive Reactive Armor (ERA) additions installed, the MPF, in theory, should have adequate protection levels up to the U.S. Army’s M2A3 Bradley Infantry Fighting Vehicle, with an all-around armor rating against 30mm Armor-Piercing rounds, and active protection against Anti-tank missiles and rockets that only the M1A2 SEPv3 with Trophy APS has.  The Marine Corps’ M1A1s do not have any Active Protection Systems or ERA against enemy Anti-tank missiles and rockets.  A MPF’s 105mm tank cannon might not be powerful enough to penetrate the latest frontal armor of MBTs, but it should be capable of providing direct fire support against bunkers, pillboxes, fortifications, and light to medium armored vehicles in support of advancing Marines.

While the 105mm MPF Light Tanks may not be as lethal or as well-protected armor-wise as the Corps’ divested M1A1s and the Army’s M1A2s, the MPFs do allow for double the number of lighter tanks to be transported via a single Navy hovercraft whereas the LCAC is overloaded to carry a single 61.7-ton M1A1 and the SSC can still only carry one M1A1 and one basic Army M1A2 SEPv3 without full TUSK and Trophy APS. MPFs fit the load-carrying capacity of both U.S. Navy hovercrafts.

Other foreign light to medium tank contenders weighing in at 30 to 45 tons are also available as well, whereas the only in-progress tank variant in the U.S. Ground Forces remains the very heavy 120mm 80-ton General Dynamics Land Systems’ M1A2 SEPv3.