The PLAN is now the world's most powerful naval force with an overall battle force of approximately 350 ships and submarines including over 130 major surface combatants.

PLAN: The largest navy in the world

China now has the largest navy in the world, with an overall battle force of approximately 350 ships and submarines including over 130 major surface combatants. In comparison, the U.S. Navy’s battle force is approximately 293 ships as of early 2020.

« In particular, China’s aircraft carriers and planned follow-on carriers, once operational, will extend air defense coverage beyond the range of coastal and shipboard missile systems and will enable task group operations at increasingly longer ranges, » the US military adds.

Besides the PLAN, the China Coast Guard (CCG)  is responsible for a wide range of missions under the umbrella of maritime rights protection, including enforcement of the PRC’s sovereignty claims, surveillance, protection of fisheries’ resources, anti-smuggling, and general law enforcement.

The CCG’s rapid expansion and modernization has improved China’s ability to enforce its maritime claims. Since 2010, the CCG’s fleet of large patrol ships (more than 1,000 tons) has more than doubled from approximately 60 to more than 130 ships, making it by far the largest coast guard force in the world and increasing its capacity to conduct simultaneous, extended offshore operations in multiple disputed areas.

Furthermore, CCG’s newer ships are substantially larger and more capable than the older ships, and the majority are equipped with helicopter facilities, high-capacity water cannons, and guns ranging from 30 mm to 76 mm. A number of these ships are capable of long-endurance and out-of- area operations.

The full report can be accessed at this link (PDF file) 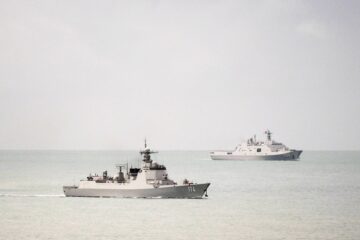