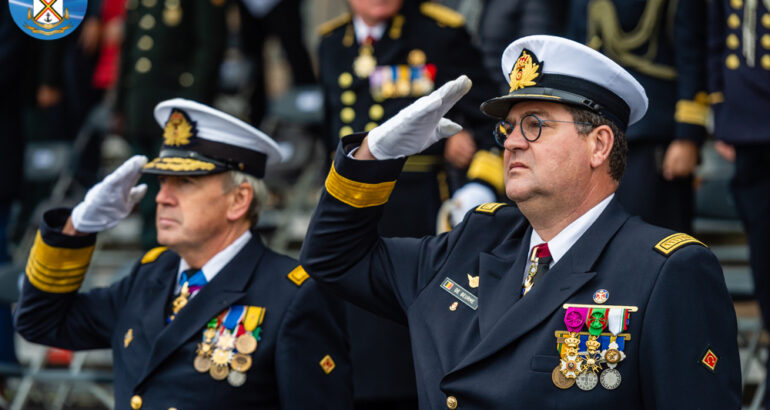 Admiral Jan De Beurme officially took command of the Belgian Navy (Belgian Marine Component, Marinecomponent or Composante marine) on September 28 during a ceremony held at the Zeebruge Naval Base.

In respect with the protective measures against Covid-19, the Chief of Defence (CHOD), Admiral Michel Hofman, « presentend the Admiral Jan De Beurme as the new commander of the Navy », the Belgian MoD comments. He succeeds to Admiral Wim Robberecht, which becomes Deputy Chief of Defence in charge of Operations and Training

Born in 1965, Admiral De Beurme entered the Belgian Royal Military Academy in 1983. In 2009, he served as the commanding officer of BNS Louise-Marie frigate when the Belgian Navy deployed her as part of the European anti-piracy operation Atalanta. Before taking the lead of all Belgian sailors, Admiral de Beurme was the Belgian Navy’s deputy chief of staff.

During Admiral Robberecht command, the Belgian Navy played an important role at the international level by participating in the escort of the French aircraft carrier Charles de Gaulle, by leading numerous missions of detection and neutralization of mines both in the North Sea and the Baltic Sea or in the Mediterranean via mine hunters and the VSW (Very Shallow Water) team. But also at the national level through the many missions of Belgium’s two patrol boats.

Admiral Robberecht also paved the way for the Navy modernization within the scope of the Belgian Strategic Vision. He initiated two major contracts for the replacement of the two Karel Doorman-class frigates and the five Tripartite-class minhunters.

For the newly appointed Chief of Navy, the main challenge remains the recruitment of enough staff to keep an operational naval force. The implementation of new working methods and the arrival of new vessels with innovative systems will again call for staff flexibility.

Xavier Vavasseur 05 Dec 2021
On 30 November 2021, French shipbuilder Naval Group laid the keel for the first of the twelve Oostende-class mine countermeasure vessels...