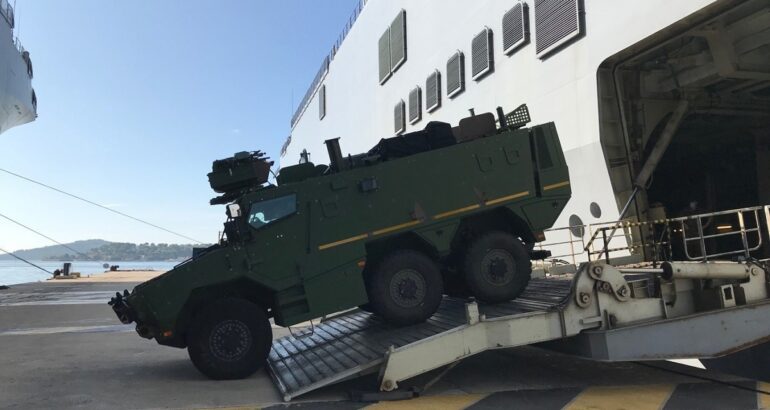 The Griffon prototype boarded the Mistral through the vessel’s side door, the objective being to verify the vehicle’s interoperability with an amphibious vessel moored to a quay without Roll-on-Roll-off (Ro-Ro) capability. These tests complement those of November 2019 which enabled the validation of the Griffon’s boarding capabilities with standard amphibious landing craft (CTM) and rapid amphibious landing craft (EDA-R).

Griffon VBMRs are intended to succeed the VAB armored personnel carrier in its troop transport task. They can also accommodate a command post, be used for artillery observation, but also as a armored ambulance. Once deployed from a PHA, they participate in the amphibious landing of troops during deployments to operational theaters.

The transition phase of the French Army towards an “all SCORPION” model constitutes a major challenge for the amphibious field. With the goal of maintaining a permanent capability, this transition will in fact require maintaining a dual competence: that of an on-board battle group (“Groupement tactique embarqué” – GTE) in the traditional format, and that of a “scorpionized” GTE whose fleet of combat vehicles will have been completely renewed, and whose data transmission systems will deeply transform interoperability with the naval force deployed in support of amphibious actions.

The GRIFFON, Multi-Role Armored Vehicle (VBMR), is capable of filling a wide spectrum of missions and is set to replace the VAB. It was designed primarily with humans in mind: air conditioning system, space optimization, etc. The goal is to allow users to achieve their mission under optimum conditions. Ten versions will be developed: Troop Transport, Command Post, Health, Artillery Observation Vehicle, etc.

The JAGUAR, Armored Reconnaissance and Combat Vehicle (EBRC) will replace the AMX10RC and ERC90. It is equipped with a threat detection system including an acoustic detonation tracking system, a laser warning detector and a missile launch detector connected to the SCORPION joint vetronics system. On-board simulation will allow the crew to train within a regiment without external means.

Both vehicles are part of the SCORPION program of the French Army which is a broad and ambitious modernization program consisting in the procurement of new vehicles and the update of existing ones with new capabilities: Integration of drones and robots into the combat system, communication with dismounted soldiers and multiple sensor management. The goal is to bring French troops into the era of collaborative combat.