You are at :Home»News»MHI Just Launched the First of the New Taigei-class Submarines for JMSDF

Taigei means “Great Whale” in Japanese and was once used as the name of a submarine tender of the Imperial Japanese Navy. The Japan Maritime Self-Defense Force (JMSDF) uses the names of submarines to refer to (1) things related to oceanographic phenomena, (2) legendary creatures and (3) underwater animals. This leaves three main classes of submarines to be operated by the JMSDF in the future: the Oyashio-class is named after underwater currents and tides, the Sōryū-class submarines are named after dragons, and it appears that the new Taigei-class will be named after whales or large fishes.

The external appearance of the Taigei is not much different from the Sōryū-class, but inside of it is a completely different submarine. First, the Taigei uses lithium-ion batteries instead of the 4V-275R Mk. III AIP system, which was installed aboard the first 10 Sōryū-class submarines.

Secondly, the capabilities of the sonar and combat command system have been improved, as well as the use of new accoustic absorbent materials and a floating floor structure to make it quieter. It is also equipped with Torpedo Counter Measures (TCM), which ejects decoys to evade enemy torpedoes for improved survivability.

The Taigei is scheduled to be commissioned into the JMSDF in March 2022, after which it will be used as a test submarine, according to the “National Defense Program Guidelines for FY 2019 and beyond” published in December 2018. In other words, Taigei will be the dedicated ship to conduct all future tests of technology on JMSDF submarines. 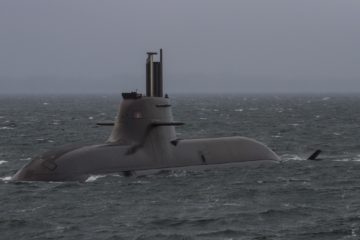 German Type 212A Submarine U33 Back from NATO Patrol Mission

Martin Manaranche 26 May 2020
The German Navy (Deutsche Marine) Type 212A submarine U33 entered the naval base and home port of Eckernförde on May 25. 2020 following a patrol mission for NATO's MARCOM.

Tso-Juei Hsu 03 Sep 2020
In the early May, Taiwanese media reported that over 250 foreign advisors and engineers, who ...