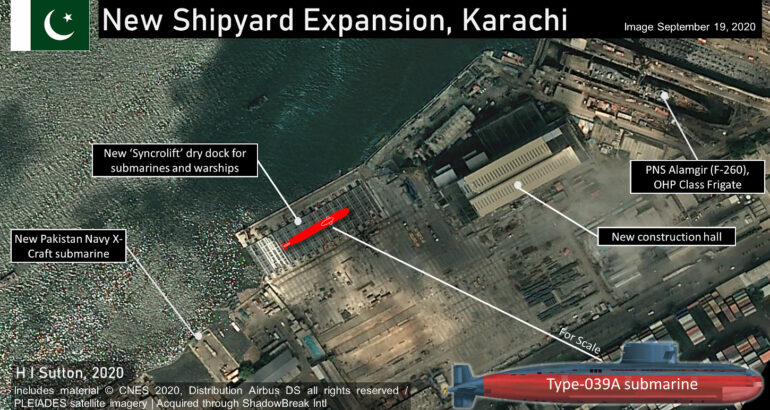 The Pakistan Navy's expansion is gearing up in Karachi. Major enhancements are evident at a shipyard, where a new construction hall and a dry dock greatly increase capacity. Although details are scarce, it seems likely that the local construction of Chinese-designed AIP (Air Independent Power) submarines will take place there.

The construction site in Karachi may put to rest previous reports that the subs would be built in Ormara. In 2016 it was reported that the local submarine construction would occur at a new Submarine Rebuild Complex (SRC) being built there. No significant construction work is evident at Ormara.

The new construction hall and dry dock are at the southern end of KSEW’s Karachi shipyard site. Footings for the halls was first observed in 2015. The twin-lane halls have slowly taken shape since then. The outer shell appears largely complete. Under their roof there should be enough room to build two submarines in parallel.

Work on the aligned dry dock appears to have started in 2016. It is a Norwegian designed Syncrolift ship-lift type built out over the water. Manufacture of the sections likely took place in China. The dry dock is 126m (415 ft) long and 32m (105 ft) across and has a lifting capacity of 7,881 tons. This is large enough for the new submarines, and would allow frigate sized warships and larger submarines in future.

Based on current information the first of the new submarines, built in China, is expected to be delivered in 2022. Local construction of the last four hulls will last through to 2028. The acquisition from China is part of a trend. Several major Pakistan Navy warship programs have gone to China in recent years. And the Pakistan Navy and Chinese Navy already cooperate closely, included close exercises involving Chinese warships and Pakistan Navy submarines.

The technology transfer will benefit KSEW. Their Stirling-based AIP (Air Independent Power/Propulsion) technology is different from the French MESMA system installed on Pakistan’s Agosta-90B type boats. Pakistan remains the only country to adopt the MESMA system. Type-039B submarines are a relatively conservative design however.

The Type-039B submarines are likely to combine Chinese systems and weapons with Pakistani systems. Local weapons are expected to include the nuclear-capable Babur cruise missile. Armed with these the boats will form part of Pakistan’s nuclear deterrent. How this deterrence role will be reconciled with typical attack submarine duties remains unclear.