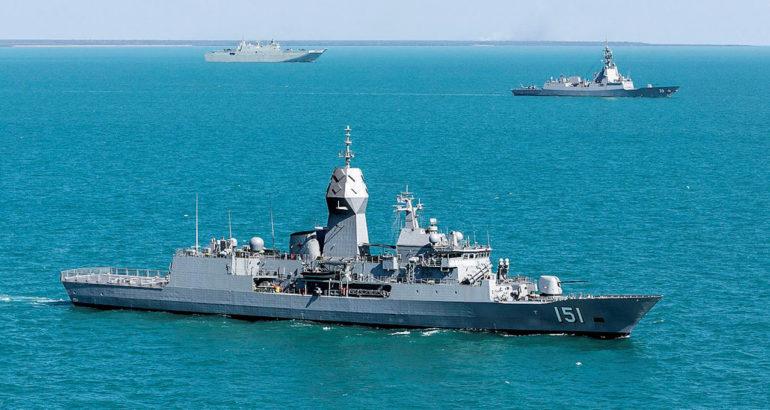 HMA ships Arunta (front), Hobart (right) and Canberra depart the Port of Darwin to commence the Regional Presence Deployment 2020 in Southeast Asia and off the coast of Hawaii (Credit : Australian DoD/RAN/LSIS Ernesto Sanchez)

Australia Seeking Torpedo Self Defense Systems for its Surface Combatants

Australia's Department of Defence issued an advanced notice for the SEA 1408 Phase 3 Project - Torpedo Self Defence.

Integrated TSD into the Combat Management System (CMS) will be pursued to provide a networked system for maritime Task Groups. This will be delivered to the Anzac-class frigates and Hobart-class destroyers as well as inform the design of the future Hunter-class Frigates, and future integration into the wider surface fleet.

Naval Group is a likely bibber for this project, having announced last year that they are ready to produce their CANTO system locally in Australia.

Other modern torpedo defense systems include the ZOKA by Turkey’s Aselsan, the Type 2170 Surface Ship Torpedo Defence (SSTD) by Ulta Electronics, SHADE by Israel’s Rafael, or the C310 by Italy’s Leonardo.