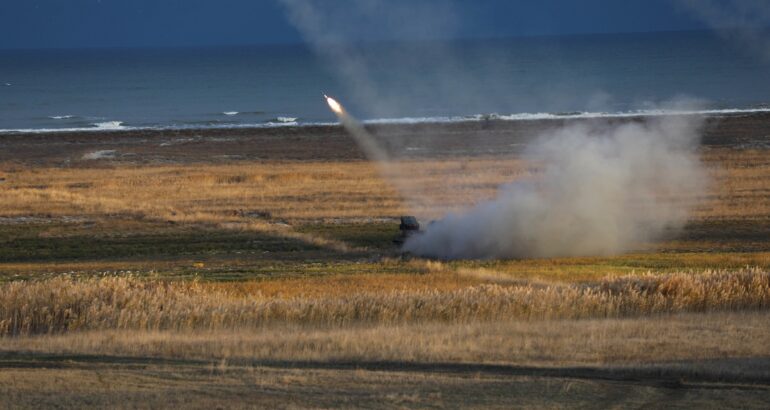 According to Stars and Stripes, and the Defense Visual Information Distribution Service (DVIDS):

“U.S. and Romanian Forces gather in the staging area after the firing of a U.S. High Mobility Artillery Rocket System and Romanian Multiple Launch Rocket System into the Black Sea as part of Exercise Rapid Falcon Nov. 19, 2020 [see photo above]. This was 1st Battalion, 77th Field Artillery Regiment’s second live fire event since reactivation just 90 days ago and was the first time U.S. forces ever fired HIMARS from land into the Black Sea in cooperation with Romanian allies.”

While a tight squeeze inside, the M142s are Roll-On/Roll-Off (RO-RO) capable and ready to fire once driven off if rocket targeting data is fed to the HiMARSfiring computers in flight.  Each HiMARS carries six rockets with a range of approximately 2km/1.2 mi to 300km/190 mi.

This isn’t the first time that the U.S. Army and the U.S Air Force used this tactic as the HIMARS RO-RO concept dates back years with the idea of landing C-130s into the field, having the HiMARS drive off, park at a distance, set up, fire, and then drive and reload back into the cargo planes for immediate take-off without the need to reload or refuel.  The U.S. Marines operate in similar fashion with their HiMARS and U.S. Marine Corps KC-130Js.

The U.S. Army’s heavier tracked Multiple Launch Rocket System (the Army’s MLRS can carry twelve rockets compared to six of the HIMARS.  The U.S. Marines do not have any tracked MLRSs in inventory) and the U.S. Army and U.S. Marine Corps’ (U.S.M.C.) HIMARS are seen as one of the pivotal key launchers for the current and future United States’ strategy and tactics for an Anti-Ship land-based weapon system that can counter peer nations’ shipping and breach Anti-Access/Area Denial (A2/AD) in the Pacific.

C-130s can land HIMARSs anywhere in the world, without needing a runway or port facilities, and once the HIMARS’s rockets are all fired, the HIMARSs and C-130s can take off again.  This clandestine Land-based Anti-Ship Missile (LBASM) and Long-range Precision Fires (LRPF) artillery truck-mounted rocket and missile launcher approach is what U.S. Marine Corps General Tracy King told Naval News at the Surface Naval Association (August) 2020, virtual due to the COVID pandemic:

“What the [U.S.] Navy and Marine Corps team provides to the Joint Force is our ability to do it at the time and place of our choosing to use the oceans as maneuver space…and that is going to be extremely difficult for our adversaries to counter.”

The Marines’ KC-130J with Marines HIMARS validates General King’s statement as the HIMARS KC-130J RO/RO concept provides a level of firepower maneuverability flown and deployed from the air and not constrained to the surface fleet of naval Carrier Strike Groups and Marine Amphibious Ready Groups.

With future land-based Anti-Ship Precision Guided Weapons in development and available now, such as the Naval Strike Missile, the U.S. Army’s tracked MLRS, 6×6 HIMARS, and 8×8 Heavy Expanded Mobility Tactical Truck (HEMTT), and the U.S. Marines’ 8×8 Logistic Vehicle System Replacement (LVSR) and HIMARS, when modified and outfitted as Anti-Shipping rocket or missile launchers, are poised to become the “Go to” system for LBASM and LRPFs to prevent enemy ships and amphibious assaults on allied-protected islands and shores.

Outplayed By Ukraine: What Is Next For Russia’s Navy In The Black Sea?

H I Sutton 19 Dec 2022
When the invasion started, it was unthinkable that the Ukraine would have the mighty Russian ...