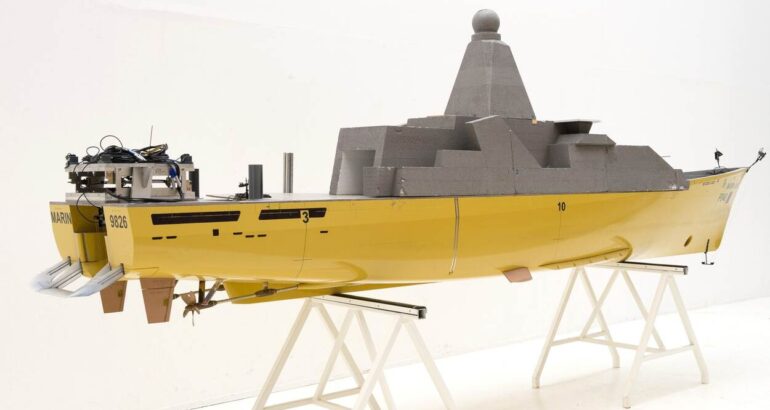 The Royal Netherlands Navy's HNLMS Zeeland offshore patrol vessel (OPV) will be the first major ship to benefit from a Hull Vane solution, an underwater spoiler that offers numerous tactical, practical and cost-effective advantages. The experiment is a world first: no other navy has dared to modify such large vessel.

The Hull Vane is an 11-meter-wide hydrofoil installed below the stern of the ship. The biggest advantage is the 10% fuel saving it provides. With a reduced resistance, the ship can also achieve a higher top speed with the same engine power. In addition, the modification ensures a reduced wake and therefore fewer waves. This is tactically important, because the ship is less visible from the air.

In addition to the tactical and cost-saving advantages, there is also an operational gain: the Hull Vane means that the aft deck fluctuates less and the helicopter deck is more stable. This makes it easier for the helicopter to land. RHIB boats can also more easily embark and disembark on the slipway. Finally, the modification reduces slamming and therefore increases the comfort for passengers.

To prove the benefits on paper without relying solely on computer analysis, the RDN Maritime Systems Department (AMS) engaged innovation managers at Military Innovation by Doing (MIND), DMO’s innovation center. Together they demonstrated the added value of the spoiler with model tests. “The company Hull Vane has equipped a 56 meters French ship, but that is the largest naval vessel so far. Our intended patrol ship is 100 meters long. That presented some necessary challenges,” says Jan van Bergen, of the AMS.

After 2 years of research, the business case apparently looked positive in 2017, when the engineers encountered a problem. Van Bergen: “The slipway for the FRISC boats was in the way, causing the propellers to hit the Hull Vane. But if we place the wing deeper, the lateral forces (forces that push against the wing in turns, ed.) shorten the life of the modification.” It was quite an effort to design a custom model. “It was a tough period, but in the end we have a good solution that more than satisfies: the service life is aimed at at least 18 years.“

HNLMS Zeeland will enter the dock next year or in 2022 for major maintenance. Van Bergen: “That could be the right time to adjust the bottom of the ship and install the spoiler.” This is only when the ship will sail again taht the Hull Vane will be really able to prove itself after a measurement program of a few weeks.

“If the results are as favorable as our simulations and model tests suggest, we hope to implement the modification on other ships as well”

Foreign navies are now watching the results with serious interest. Van Herk added “At international symposia it appeared that everyone thought it is a fantastic application, but that nobody dares to do it. The purchase and the modifications to the ship both cost half a million. After that another million for the installation. The total cost should then reach €2 million”