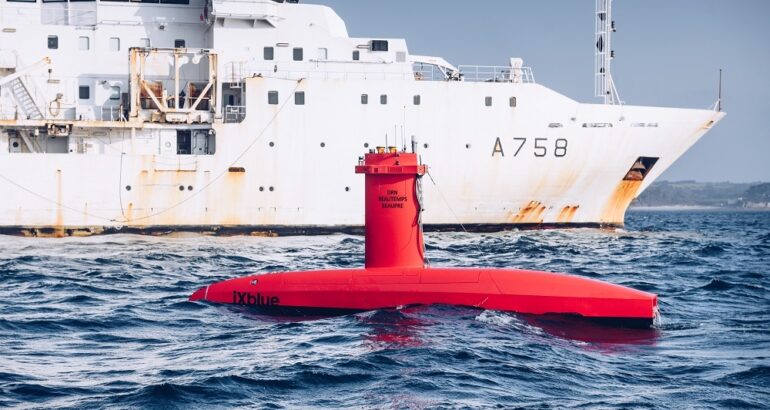 The French Navy (Marine Nationale)'s Hydrographic and Oceanographic Service (SHOM) conducted a test campaign of the DriX unmanned surface vessel (USV) and its launch and recovery system (LARS) off the coast of Britany. iXblue's USV was tested in line with the "Future hydrographic and oceanographic capacity" (CHOF) program.

The CHOF program calls for the replacement of three French Navy BH2 type hydrographic vessels: La Pérouse, Borda, and Laplace, commissioned in 1988 and 1989. “This program must not only renew old ships but also adapt hydrographic capacities to new available technologies, including the use of drones (…),” the French Navy says in a statement

In preparation for this program and in cooperation with French company iXblue, the SHOM carried out an evaluation campaign of the Drix USV in the Iroise Sea throughout the month of September from the hydro-oceanographic ship (BHO) Beautemps-Beaupré.

The Drix assessment involved qualifying the vessel hydrographic performance, understanding the potential concept of uses and evaluating the gains offered by these innovative systems.

These tests consist of bathymetric surveys at different depths, reaching nearly 200 m in the Ouessant pit, with the aim of qualifying the overall performance of the machine in terms of endurance and data quality, and of evaluating its added value compared to the systems currently in service (speedboats and hydrographic vessels).

The objective of such system is to increase the productivity of hydrographic surveys while improving the quality of the data collected. One Drix, then two Drix were thus successively deployed in collaborative mode to verify their complementarity, their behavior and to understand the needs induced by the doubling of this capacity.

Other drone experiments, both surface and underwater ones, will be carried out over the next two years as part of the preparation phase of the CHOF program. Ultimately, these experiments will make it possible to define the most appropriate and efficient methods to meet the growing needs for hydrographic surveys.

Such evaluations at sea also aim to learn lessons in terms of design and specification for the new generation hydrographic vessel (BH NG) intended to replace the BH2: handling and implementation capacities, on-board maintenance, crew sizing and skills…

Feedback will serve in the discussions regarding the sizing of the future hydrographic and oceanographic capacity of the French Navy. The first BH NG is planned for 2026.

According to iXblue, DriX offers unmatched seakeeping and high speed transit capabilities (up to 14 knots) thanks to its highly hydrodynamic hull, along with an enhanced autonomy of up to 10 days. Its sensors-embedded gondola, two meters under the surface, ensures optimal data gathering. Thanks to its open architecture, DriX can be tuned to fit the needs of any military customer and can be used to conduct a wide range of military missions.

The USV is 7.7m long x 3m high, meaning that it can be transported globally in an ISO container. It has its own deployment system (DDS) that can launch, recover and refuel DriX at sea from a single point crane or davit either onboard or on a jetty.

As we reported previously, DriX was also tested by the US National Oceanic and Atmospheric Administration (NOAA) last year. Its military variant, SeaDriX is also being pitched for anti-submarine warfare missions.