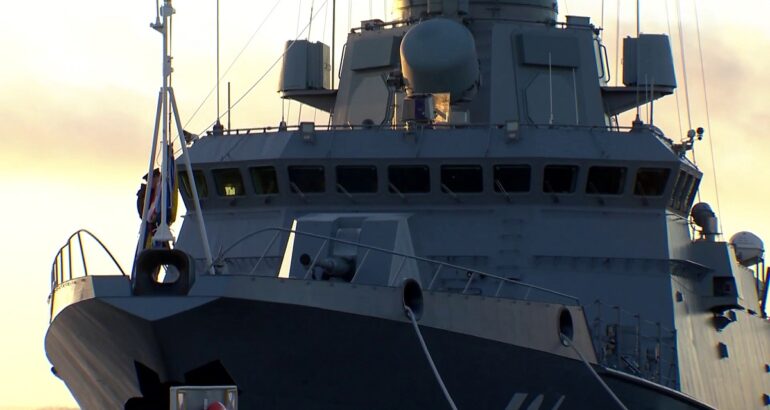 The Russian Navy flag was hoisted on November 21, 2020 on the Odintsovo Karakurt-class second serial corvette of project 22800 in Baltiisk. It joined the Baltic fleet and will operate in the missile ship formation of the Baltic military base. The Russian Navy thus received the first warship armed with new Pantsir-M naval anti-aircraft gun-missile (AAGM) system, TASS-DEFENSE writer Vasily Kostin said.

The corvette has successfully passed the running and acceptance trials to test all mechanisms and arms. It test fired a Kalibr cruise missiles at a sea target in the White Sea.

“The acceptance act was signed after successful running and state trials. The Navy commander-in-chief ordered to include the Odintsovo into the Baltic fleet. It will operate in the missile ship formation of the Baltic naval base,”

The Mytischi lead corvette of project 22800 joined the Baltic fleet in December 2018 followed by the Sovetsk in October 2019. The Odintsovo is the first project 22800 corvette armed with Pantsir-M air defense launcher. It was laid in July 2016 by Pella Shipyard in Leningrad region and floated in May 2018.

Open sources said Russian shipyards are building 13 project 22800 corvettes — the Burya by Pella, the Kozelsk, the Okhotsk, the Vikhr by More Shipyard in Crimea, the Tsiklon, the Askold, the Amur by Zaliv Shipyard in Kerch, the Typhoon, the Tucha by Zelenodolsk Shipyard, the Rzhev, the Udomlya, the Pavlovsk and the Ussuriisk by Amur Shipyard.

Project 22800 was designed by the Central Maritime Design Bureau and is armed with Kalibr missiles, Pantsir-M, AK-176MA 76mm artillery gun.

In October 2020, the Odintsovo test fired Pansir-M at air targets. Mi-6 small targets were released by Su-27 fighter jets of the Baltic fleet. They were all destroyed. Pantsir-M is now installed on project 22800 corvettes and other upgraded warships are to be armed with it. The complex is likely to become the main close-range air defense weapon of the Russian Navy.

Palash was designed as an antiaircraft missile complex, however Russian warships receive it without guided missiles. It is installed on project 22350 frigates (2), the Dagestan frigate of project 11661 (1) and R-60 missile boats of project 1241 (1).

Thus, AK-630 designed in 1960s are the main weapon against antiship and other air weapons of the Russian warships regardless of the class and displacement. Only some big-displacement ships (except for the Steregushchy) are armed with modern air defense weapons with a much bigger range than automatic 30mm guns.

Link to Part 2 of this article