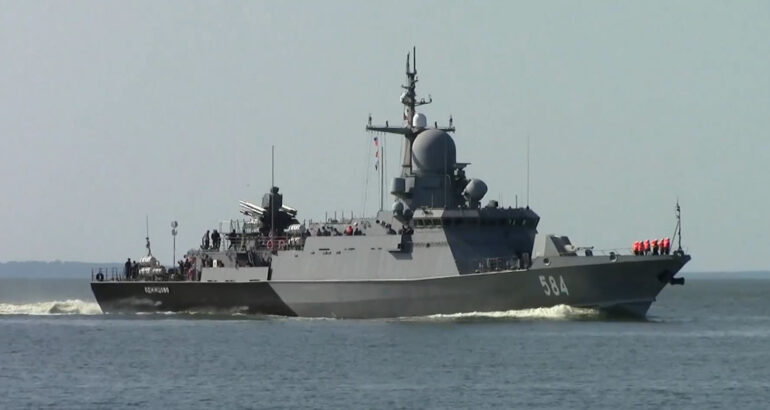 Since June 30, 2020, the small missile ship "Odintsovo" of project 22800 has been undergoing state testing in the Baltic Sea. Screenshot from video by Евгений Бабанов

The Russian Navy flag was hoisted on November 21, 2020 on the Odintsovo Karakurt-class second serial corvette of project 22800 in Baltiisk. It joined the Baltic fleet and will operate in the missile ship formation of the Baltic military base. The Russian Navy thus received the first warship armed with new Pantsir-M naval anti-aircraft gun-missile (AAGM) system, TASS-DEFENSE writer Vasily Kostin said.

20mm Phalanx designed in 1960s remains the main close-range air defense weapon of US and allied warships. However, it should not becalm Russian specialists, as the quantity superiority of US and NATO fleets and naval aviation compels Russia to reinforce close-range air defense of single warships and formations. Western countries have been intensively designing stealth antiship missiles of late (AGM-158C LRASM, MST, NSM). In the coming decade, the fleets of potential adversaries are likely to be armed with hypersonic antiship missiles.

Pantsir-M is one of the responses. Open sources said it has been designed by the Shipunov Instrument-Building Design Bureau since late 2000s — early 2010s.

Pantsir-M was for the first time displayed at the International Naval Salon (MVMS) in July 2015. Pantsir-ME export option was also created.

It is a development of the ground Pantsir-S which confirmed effectiveness in Syria. It was defending Humaymim airbase and Tartus naval base and intercepted drones and projectiles of multiple launch rocket systems. Pantsir-S1 export option of the Syrian army displayed the same high characteristics. They intercepted 23 out of 25 targets in April 2018. In 2018-2019, Israeli aircraft succeeded to destroy two Pantsir which were either recharged or in a non-combat state. Several launchers were destroyed by Turkish drones during combat in Syrian Idleb and in Libya in 2020. In most cases the destroyed vehicles were in a non-combat state.

It was reported at MAKS airshow in August 2015 that the Defense Ministry signed a contract for three Pantsir-M for project 22800 corvettes. The Odintsovo third warship of the series was the first to receive it.

Preliminary trials of the launcher were completed in September 2016. Sea trials of Pantsir-M had to begin on the Shuya missile boat of project 1241 of the Black Sea fleet in 2018. The Izvestia daily said in the summer of 2018 that the Stavropol corvette of project 21631 would be armed with Pantsir-M. Defense Ministry and industry representatives said the Admiral Kuznetsov aircraft carrier and the Admiral Nakhimov cruiser would also get the new launchers.

Pantsir-M was presented at the International Naval Salon in St. Petersburg in June 2017. Pantsir-ME export option was for the first time demonstrated at IDEX-2019 show in Abu Dhabi.

Link to Part 1 of this artcile