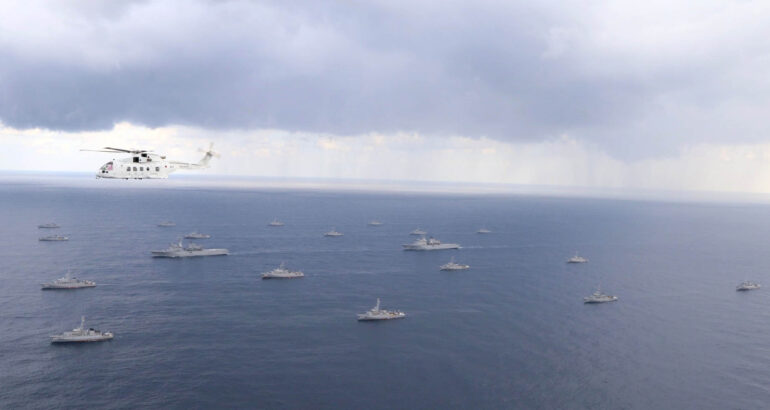 MINEX 3JA is part of an annual series of exercises between the U.S. Navy and allied navies designed to increase proficiency in mine countermeasure operations. JMSDF picture.

The U.S. Navy and Japan Maritime Self-Defense Force (JMSDF), began the at sea portion of Mine Warfare Exercise (MINEX) 3JA 2020 off the coast of southwestern Japan, Nov. 20.

MINEX 3JA is part of an annual series of exercises between the U.S. Navy and allied navies designed to increase proficiency in mine countermeasure operations. During the four-day exercise, participants conduct unit-level mine warfare tactics to include mine hunting, detection, and prosecution. The exercise will culminate in a combined phase in which U.S. and JMSDF will coordinate and communicate to clear a route for ships through a simulated minefield.

Capt. Derek Brady, commodore Mine Countermeasures Squadron Seven (COMCMRON 7), is excited to be working with the JMSDF again and elaborated on the importance of maintaining a close, interconnected partnership between the two naval forces. “I always look forward to working with our Japanese defense force partners,” said Brady. “These exercises help us to remain ready to ensure freedom of navigation throughout the region.”

JMSDF Mine Division 3 and U.S. Navy Commander, Mine Countermeasures Squadron 7 worked together throughout the exercise to direct mine hunting tasks for U.S. and JMSDF ships. This training allowed all of the units to practice communicating and operating in a combined environment and learn to maximize their cumulative mine hunting capability.

“This will be the 19th special minesweeping exercise in the Sea of Hyuganada. Although the COVID-19 is still far from over, I am very pleased that the mine warfare forces of Japan and the U.S. will be able to train together in the Sea of Hyuganada, as they have done in previous years, as well as in Mutsu Bay. The purpose of the training is to further enhance the interoperability of the U.S. and Japanese mine warfare forces and to improve the skills of mine warfare,” said Japanese Rear Adm. Fukuda Tatsuya, Commander Mine Warfare Force. “Japan-U.S. naval cooperation in mine warfare is essential to ensure the safety of ships’ navigation, and I am confident that the improved mine warfare capabilities and strengthened coordination between the U.S. and Japanese navies gained through this exercise will contribute to the stability of the Indo-Pacific region. I believe that the participating U.S. and Japanese forces will achieve the desired results in this exercise.”

U.S. naval forces took this opportunity to check their proficiency in counter mining operations while working alongside long-time allies.

“My crew is motivated to be getting underway and executing our mission,” said Lt. Cmdr. Earvin Taylor, commanding officer of the USS Patriot (MCM 7). “It is our job to ensure the safe navigation of the seas and we are proud of what we do.”

JMSDF units will include Mine Warfare Force (MWF) and 19 ships including minesweeper tender, minesweeper ocean, minesweeper coastal and minesweeping controller ships. Additionally, they will include three mine countermeasures helicopters (MCH) 101 participating.