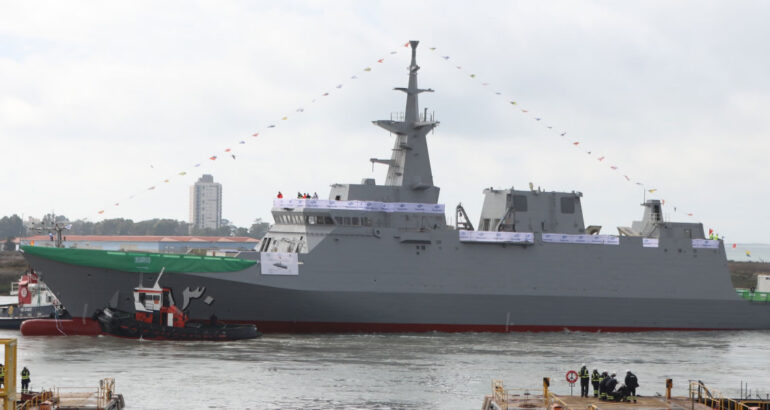 The event was attended remotely by the Commander of the RSNF, Vice-Admiral Fahad Bin Abdullah Al-Ghofaily; by the President of Navantia, Belén Gualda; by the CEO of SAMI, Walid Abukhaled; and by the AJEMA, Teodoro López Calderón. Likewise, the Minister of Foreign Affairs, Arancha González Laya, has had a special participation with a final speech in which she has valued the commitment of the Spanish Government with this naval program and the desire of future collaborations between both countries.

The Commander of the RSNF has highlighted the work of Navantia and the Spanish Navy, “giving the highest to achieve the training of the first crew in Spain, qualified personnel capable of operating and maintaining these ships.”

The first-in-class ship; Al Jubail, was launched on 22 July at the same shipyard. The AL SARAWAT program, whose last ship must be delivered in the year 2024, includes, besides the construction of five corvettes, the Life Cycle Support for five years, from the delivery of the first ship, with an option for five more years.

The Al Jubail-class corvette (Avante 2200) has a length of 104 metres, a beam of 14 metres and will be able to accommodate 102 people (crew and additional personnel). It will reach a maximum speed of 27 knots and, among other aspects, it has the capacity to carry 21 days’ supplies on board.

The contract includes Life Cycle Support for five years and the supply of various services such as integrated logistical support, operational and maintenance training, supply of training and training Centers for the Combat System and Platform Control System for ships, Support to the Life Cycle, previously mentioned, and the systems for the maintenance of ships in the RNSF Jeddah Naval Base.