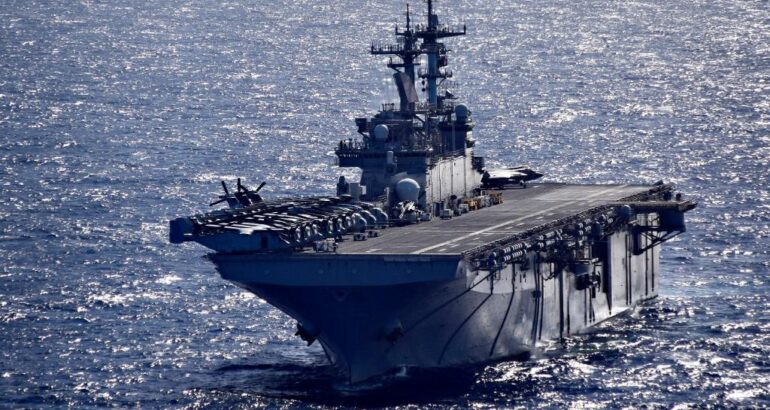 The USS Wasp is the lead ship of a class of U.S. Navy amphibious assault ships. It is the 10th Navy vessel to bear the name since 1775. US Navy picture.

BAE Systems has received a $197.4 million contract from the U.S. Navy to drydock and perform maintenance and modernization work aboard the amphibious assault ship USS Wasp (LHD 1).

This is the second time in four years that the company has performed significant work onboard the Wasp to sustain its warfighting capability.

Under the new contract, BAE Systems’ Norfolk shipyard will begin working aboard the 843-foot-long USS Wasp in February 2021, performing hull, tank and mechanical work. The contract includes options that, if exercised, would bring the cumulative value to $237.7 million.

During the company’s last maintenance availability aboard the Wasp, from December 2016 to May 2017, BAE Systems added modifications to support Joint Strike Fighter operations onboard.

The USS Wasp is the lead ship of a class of U.S. Navy amphibious assault ships. It is the 10th Navy vessel to bear the name since 1775.

To prepare for drydocking the Wasp, BAE Systems sent its largest floating drydock in Norfolk to a Baltimore, Maryland, shipyard for five months of lifecycle maintenance. The drydock, called “Titan,” returned to Norfolk earlier this month. The lifecycle maintenance work performed on Titan drydock will enable the yard to service the largest Navy ships in the port of Norfolk for another 20 to 25 years. Titan is capable of lifting up to 52,500 long tons. The USS Wasp displaces about 40,500 long tons.