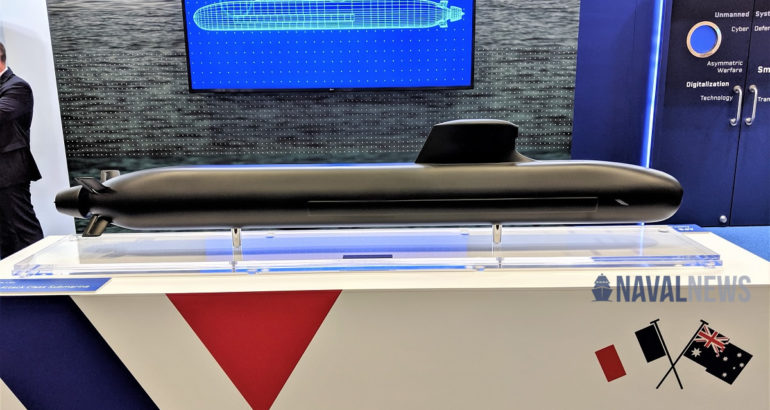 Scale model of the Attack-class submarine on Naval Group stand at PACIFIC 2019.

Australia's Department of Defence announced today that Lockheed Martin Australia signed a contract with Thales UK Ltd for the design of the outboard flank array for the Attack-class submarine. The contract also includes partnering arrangements with Australian industry.

According to the Australian DoD, the outboard flank array forms part of the Sonar Subsystem, which is used when the submarine is submerged. This vital piece of equipment acts as the submarine’s eyes and ears, providing situational awareness for the crew.

Defence electronics company Thales is recognized as an expert in the field of sonar systems and has already designed and supplied the flank arrays for the Royal Navy’s Astute-class and French Navy Suffren-class submarines. The company is also upgrading the sonars fitted aboard the existing Collins-class submarines of the Royal Australian Navy.

Minister for Defence, Senator the Hon Linda Reynolds CSC said the design of the outboard flank array is vital to the operational effectiveness of the Attack-class submarine and its regional superiority:

“Thales is a global leader in underwater systems and the world’s top exporter of sonars and related systems for naval forces. This contract builds on the work Defence already has with Thales to upgrade the sonar suite of the Collins fleet. “Following a competitive tendering process, Thales is committed to establishing the Australian industrial capability needed to support the sovereign build, operation and sustainment of the Attack class submarine. This is a significant step in the right direction to build up Australian capability for the Future Submarine Program. By bringing together the best underwater sensing technology with local industry, it will ensure we deliver a sovereign regionally superior submarine.”

Thales will support and promote Australian Industry Capability by:

Following the successful completion of the design phase, further work will be contracted for the manufacture of the subsystem from 2023.

Richard Scott 14 Jan 2023
Thales has confirmed that the US Navy’s FFG-62 Constellation-class frigate is to be equipped with its CAPTAS-4 low-frequency VDS.