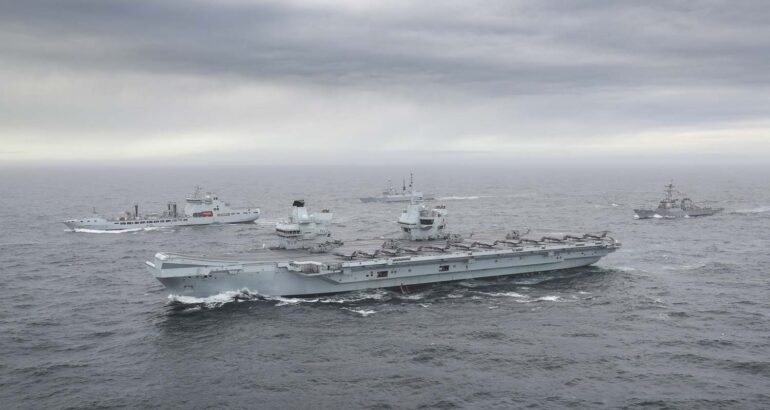 Fleet Commander Vice-Admiral Jerry Kyd was received on HMS Queen Elizabeth to mark the transfer of the role from HMS Albion, while Royal Navy ships and shore establishments were informed by a signal at 1330.

“The position of Fleet Flagship is a symbol of HMS Queen Elizabeth’s importance to the nation, not just in restoring our carrier strike capability, but as a rolling statement of British commitment to global security, prosperity and trade. It’s right that we bestow such a historic title now. In the coming months HMS Queen Elizabeth will lead the most ambitious Royal Navy deployment in decades. She will be a focal point as we look forward to an extraordinary year.”

It was announced last week that the UK’s new Flagship and Lightning Force of F-35B stealth strike fighters will also be complemented by a detachment of the fifth-generation aircraft from the US Marine Corps, and a US Navy destroyer during her first operational strike group deployment.

HMS Queen Elizabeth and her strike group will spend time developing collective war-fighting skills when NATO navies gather for exercise Strike Warrior off Scotland during the spring, before departing for the Mediterranean.

Commanding Officer, Captain Angus Essenhigh, said: “It is a fantastic privilege for Queen Elizabeth to be made the Fleet Flagship as we prepare to sail at the heart of UK’s very high readiness Carrier Strike Group. We look forward to doing the nation proud as we deploy on operations for the first time.”

Last year, the Prime Minister, Boris Johnson, confirmed that HMS Queen Elizabeth will be at the centre of a Carrier Strike Group deployment to the Mediterranean, the Indian Ocean and East Asia. She will embark F-35B from 617 Squadron (the “Dambusters”), Royal Navy Merlin helicopters, and be escorted and supported by Royal Navy Type 45 destroyers, Type 23 frigates and support ships of the Royal Fleet Auxiliary.

Assault ship HMS Albion had been flagship since March 2018, deploying to the Indo-Pacific for 10 months; to the Baltic for major multi-national exercises; and latterly to the Mediterranean leading NATO security patrols and experimental warfare trials. Her sister, HMS Bulwark, previously led the Fleet for four years.

Commanding Officer of HMS Albion, Captain Simon Kelly, said: “While it is with some sadness that we hand over the responsibility to HMS Queen Elizabeth, we are proud to be part of the transfer which marks a new era for the Royal Navy and the nation.”