As part of the restructured Maritime Security Command, the new MRSF is set up to better trackle evolving maritime threats that have grown in scale and complexity, particularly in the Singapore strait area. According to a recent French Navy report on worldwide maritime piracy and robbery, robbery is on the rise in South East Asia, particularly in the Straits of Singapore and Malacca.

According to a RSN statement, the new flotilla will add capacity and build capabilities to protect Singapore’s territorial waters and respond to expanded maritime security threats. As a start, the flotilla will operate four Sentinel-class Maritime Security and Response Vessels (MSRVs) and two Maritime Security and Response Tugboats (MSRTs) to enable more calibrated responses. Down the road, the MSRF will be equipped with new purpose-built ships.

“The MSRF will strengthen Singapore’s ability to deal with maritime security threats that have grown in scale and complexity through the years. The additional capabilities will provide us with more flexibility and a wider range of responses, and allow us to be deployed for greater persistence to safeguard and protect Singapore’s territorial waters.”

Assets of the RSN’s news Maritime Security and Response Flottila

Four ex-Fearless class patrol vessels have been refurbished as the Sentinel-class MSRVs. In addition to refitting the vessels to extend their operational lifespan, the Sentinel-class MSRVs will be installed with a range of calibrated capabilities. This includes enhanced communications equipment, improved visual and audio warning systems, installation of a fender system and modular ballistics protection.

MSRV Sentinel and MSRV Guardian will entered into operational service on 26 January, while MSRV Protector and MSRV Bastion will be refurbished and operationalized in the coming months.

Two tugboats will join the MSRF under a long-lease arrangement. As dedicated tugboats, they will enable the RSN to better respond to and assist incidents at sea, as well as support base operations.

The future purpose-built vessels are still in the early stages of concept design. They are expected to be larger than the Sentinel-class MSRVs and have longer endurance to operate at sea for up to a few weeks. Additionally, these vessels will be designed for lean manning with modular capabilities. 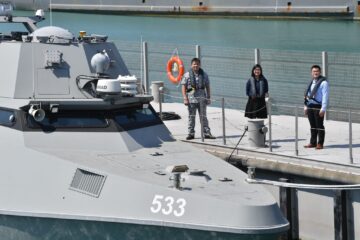 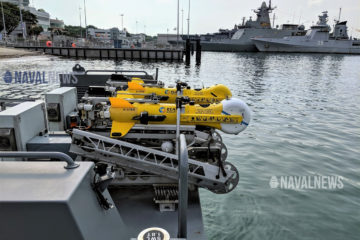 Xavier Vavasseur 18 Feb 2021
The Republic of Singapore Navy (RSN) announced that it neutralized an underwater threat using an EMDS launched from a USV...