The coastal base for strategic unmanned underwater Poseidon craft will be ready in the summer of 2022. The construction of maintenance and storage infrastructure for the new strategic weapon will be completed.

Trials of the first carrier are nearing completion. The timely creation of the base will extend the life cycle of the weapon, the Izvestia daily writes.

Maintenance and storage base, warehouses and workshops are built for Poseidon to prepare the weapon for combat duty and launches. The construction is to be completed in June 2022 according to the technical assignment obtained by the daily. The rehabilitation of the territory is to be completed by the same time.

The Defense Ministry has not disclosed the deployment location of submarines armed with Poseidon. In late 2020, it said the creation of the complex was proceeding successfully. The crew of the first submarine carrier is mastering the new weapon.

“It often happened in Soviet time that a new warship arrived in the home port of call and there was nothing except a floating berth. It was first necessary to create the weapon and then think about provision. It is impossible to act in the way at a current development stage of science and technology,” Hero of Russia Rear Admiral Vsevolod Khmyrov said.

Poseidon is a sophisticated weapon and it takes effort to maintain it in proper order, he added.

Former submarine commander Captain 1st rank Igor Kurdin said Soviet mistakes often denied a chance to aircraft-carrying and other big ships to moor at berths in unequipped bases. “They had to stay anchored and generate power themselves. It means they consumed the resource without sailing out. Submarines were deployed in bases built in 1950s. They were inconvenient, to put it mildly. The timely creation of infrastructure will extend the life cycle of new hardware,” he said.

The first information about Poseidon appeared in late 2015. The media reported about a super powerful nuclear torpedo, which destroys coastal infrastructure and delivers guaranteed unacceptable damage to the adversary.

The nuclear-powered craft has an unlimited range. Experts believe its size allows carrying a warhead that exceeds the yield of ordinary intercontinental ballistic missiles.

The Sarov N-90 experimental submarine was used to test the new weapon. Since 2008, it test fired mockups and prototypes.

The Belgorod K-329 special-designation submarine will be the first carrier of Poseidon. It was built by modified project 09852. Another submarine for Poseidon is being built. Media said the Khabarovsk nuclear submarine is to be floated by the autumn of 2021.

Besides Poseidon, President Vladimir Putin announced another five weapons of strategic deterrence in March 2018. They will guarantee powerful Russian retaliation to any nuclear surprise attack and will make the US global missile defense senseless, the Izvestia said.

Poseidon is the largest torpedo ever developed in any country. At around 2 meters (6.5 ft) in diameter and over 20 meters (65 ft) long, it is approximately twice the size of submarine launched ballistic missiles (SLBMs) and thirty times the size of a regular ‘heavyweight’ torpedo. 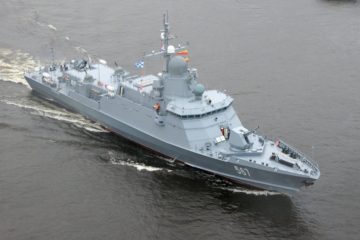