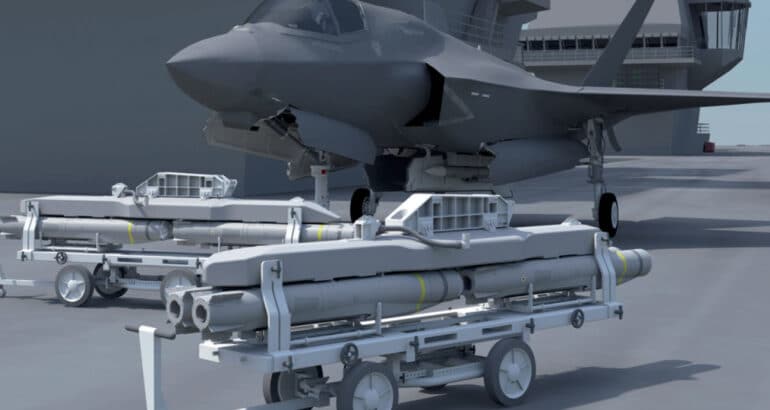 SPEAR3 and F-35B on the deck of a Royal Navy Queen Elizabeth-class aircraft carrier. MBDA picture.

SPEAR3 will become the principal strike weapon of the F-35 Lightning jets operating from the decks of HMS Queen Elizabeth and Prince of Wales.

Designed to knock out warships, tanks and armoured vehicles, missile launchers, bunkers, radar posts and air defence batteries, the new missile can be fired at such long range – more than 140 kilometres (nearly 90 miles) – it should keep the Navy and RAF pilots out of harm’s way from enemy ground defences.

Defence firm MBDA has been awarded £550m to equip the Lightning Force – based at RAF Marham – with the new weapon, which has been developed over the past decade and will be introduced to the front line over the next seven years.

Weighing under 90kg and just 1.8 metres long, SPEAR3 – Select Precision Effects At Range missile No.3 – is powered at high subsonic speeds by a turbojet engine, can operate across land and sea, day or night, and strike at moving and stationary targets.

It will support 700 jobs in the UK – 190 of them highly-skilled technology jobs in system design, guidance control and navigation and software engineering – at sites around the country including Bristol, Stevenage and Bolton.

Testing, simulation and trials will include controlled firings from a Typhoon aircraft before the missile is delivered to Marham and the Portsmouth-based carriers for front-line operations.

In the absence of a true anti-ship missile for British F-35Bs, MBDA’s SPEAR will be the only option available for the Royal Navy to fly anti-surface warfare (ASUW) missions from the Queen Elizabeth-class aircraft carriers. Each F-35Bs can carry up to 8x SPEAR missiles internally (in the weapons bay) meaning they remain low observable. Despite its subsonic speed and relatively small warhead (for anti-ship role) a single F-35 could theoretically launch a saturating attack of 8 missiles against a surface vessel. This is probably enough to disable or put out of combat most vessels, of frigate size and below.

Meanwhile, the UK Ministry of Defence announced that the Carrier Strike Group (CSG) has reached Initial Operating Capability (IOC). An operational deployment later this year will see the Royal Navy HMS Queen Elizabeth Carrier Strike Group sail in the Mediterranean Sea, the Persian Gulf and end up in the Pacific (in waters near Japan). The ship will carry 24 F-35B jets, including US Marine Corps aircraft, in addition to a number of helicopters.