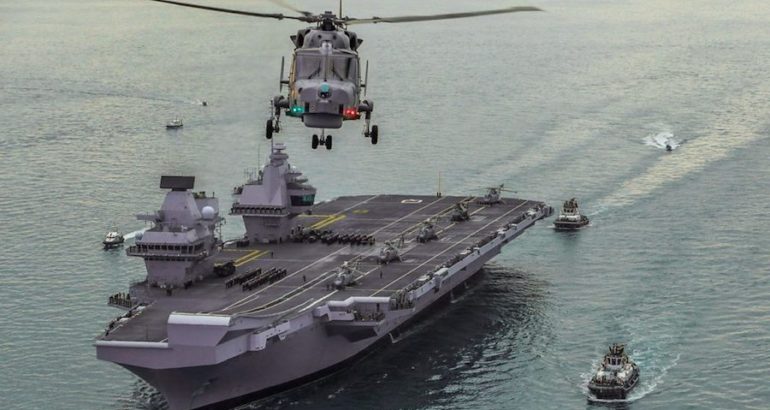 CSG21, led by UK aircraft carrier HMS Queen Elizabeth, will herald a new era for UK-Japan defence and security cooperation, providing opportunities for the Royal Air Force and Royal Navy and their respective Japanese counterparts to operate together and support opportunities for future collaboration, including on the F35 and Amphibious programmes.

Both the Foreign and Defence Secretary reaffirmed the UK’s long-term commitment to working closely with Japan to uphold the security of the Indo-Pacific and demonstrate the value of a unified approach to facing global challenges.

“Japan and the UK have forged a close defence and security partnership that is being elevated to new heights this year when the UK Carrier Strike Group visits the Indo-Pacific. The most significant Royal Navy deployment in a generation demonstrates the UK’s commitment to working with our partners in the region to uphold the rules-based international system and promote our shared security and prosperity.”

“Japan is a key security partner for the UK, and a close, enduring friend. This year will see our two nations working even more closely together with the UK’s Presidency of the G7 and hosting of the UN Climate Conference. The UK’s Indo-Pacific tilt, including the visit of HMS Queen Elizabeth to the region, demonstrates our shared priorities and common strategic interests from maritime security to climate change and free trade.”

The four ministers agreed that Japan and the UK are each other’s closest security partners in Asia and Europe respectively, with shared values and common strategic interests. They resolved to further strengthen cooperation on defence, security and trade in order to uphold those values.

A recent Maritime Security Arrangement agreed between the Royal Navy and the Japan Maritime Self-Defense Forces (JMSDF) is one example of how the two countries’ Armed Forces are deepening their relationship. The arrangement, signed by JMSDF and the First Sea Lord Tony Radakin – head of the Royal Navy – will see the two countries share maritime domain awareness, helping to create a safe environment for international shipping transiting between the Indo-Pacific and Europe.

In this spirit, the four ministers committed to further cooperation on monitoring illicit ship-to-ship transfers by North Korea.

The Carrier Strike Group (CSG) has reached Initial Operating Capability (IOC) in December 2020. An operational deployment later this year will see the Royal Navy HMS Queen Elizabeth Carrier Strike Group sail in the Mediterranean Sea, the Persian Gulf and end up in the Pacific (in waters near Japan). The ship will carry 24 F-35B jets, including US Marine Corps aircraft, in addition to a number of helicopters. It will also be escorted by a U.S. Navy destroyer.