Genoa/Madrid, February 11, 2021 – NAVIRIS, the 50/50 joint venture company between Fincantieri and Naval Group in charge of development of cooperation programs, and NAVANTIA have signed a Memorandum of Understanding (MoU) aimed at enlarging the industrial cooperation for the European Patrol Corvette (EPC) program, the most important naval initiative within the Permanent Structured Cooperation (PESCO) project.

The EPC will be a smart, innovative, affordable, sustainable, interoperable and flexible vessel to meet the future missions in the evolved world context of mid-21st century. EPC will be a fully ready surface combatant to carry-out diversified missions, primarily aimed at enhancing maritime situational awareness, surface superiority and power projection, particularly in the context of governmental peacetime actions, such as those aimed at counteracting piracy and smuggling, as well as those actions dedicated to humanitarian assistance, migration control and aimed at ensuring freedom of navigation. It will be about 100 meters and 3.000 tons, able to replace in the near future (from 2027 onward) several classes of ships, from patrol vessels to light frigates. The design requirements for these vessels, with a clear objective of commonality of solutions and modularity for adaptation to national requirements, are expected from the Navies in 2021.

On the industrial side, NAVIRIS and NAVANTIA will act in a fully coordinated way with Fincantieri and Naval Group for the EPC program. The studies could potentially benefit from European Union and national funds and will include a large part of R&D leading to innovative solutions for making easier the co-development and interoperability, the efficiency of the vessels in operations and the digital data management.

The ambition of the project, which has been joined so far by four Countries at PESCO level, (Italy as coordinator, France, Spain and Greece), is to include other European partners to integrate technological bricks, which correspond to innovation streams matching with national EPC requirements and European Commission strategy and guidelines.

The collaborative project was launched in November 2019 by the European Council under the PESCO scheme. Italy and France started the project (12 November 2019) and were joined by Greece (12 January 2020) and Spain (2 April 2020).

Fincantieri and Naval Group are the main contractors in this project, and the EPC is likely to be the first vessel designed by the newly formed joint venture NAVIRIS. The Italian-French company headquarters are located in Genoa, Italy and its R&D center near Toulon, France.

As we previously wrote, In June 2019, the French Navy (Marine Nationale) and the Italian Navy (Marina Militare) expressed the military need for their respective staffs. The European Patrol Corvette should, according to NATO’s typology, be a “Limited Warship Unit” with a fully laden displacement of approximately 3,500 tonnes. The hulls will be approximately 110 meters long with a draft of 5.5 meters or less.

The Spanish participation in the PESCO European Patrol Corvette (as outlined by InfoDefensa.com) shows that the project is available in three versions:

The first version seems to match Italian considerations and could match Greek needs, while France could be interested in two of the three preliminary projects. The respective targets for the Marina Militare and the Marine Nationale are eight EPCs (replacing the Comandanti and Cassiopea classes ) and nine to eleven EPCs for the French Navy. 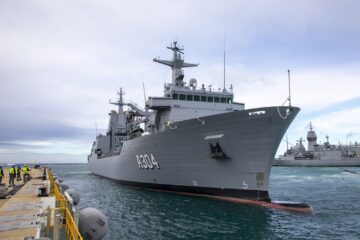