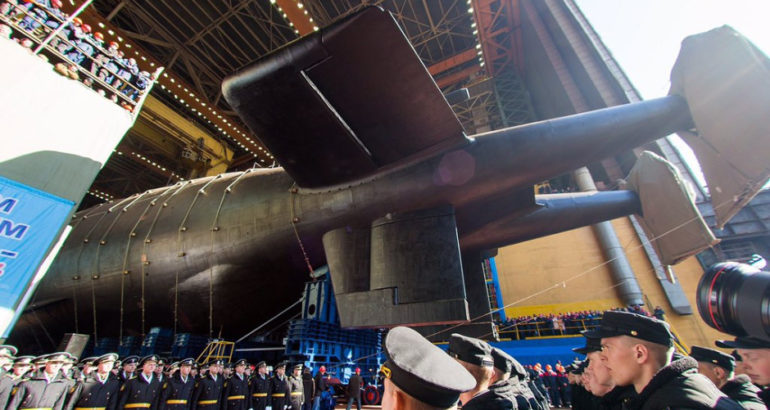 Russia Launched its Project 09852 Special Mission Submarine 'Belgorod' in 2019. Photo of the ceremony by by Oleg Kuleshov

The Belgorod nuclear-powered special mission submarine of project 09852 is preparing to sail out for the first time. The submarine is one of the most ambitious Russian shipbuilding projects.

Does the Russian Navy really need it? It is receiving Yasen and Yasen-M-class SSGN of projects 885 and 885M and Borey and Borey-A-class SSBN of projects 955 and 955A, the Izvestia daily writes.

Defense Ministry sources said the Belgorod is in a high state of readiness. Preliminary trials of mechanisms confirmed their technical reliability.

The Belgorod was created to fight surface groups of warships. It had to carry 20 Granit cruise missiles and become the 14th submarine of projects 949 and 949A.

It was officially laid after the Soviet collapse on June 24, 1992, however the construction began earlier. In 1977, the construction of the Belgorod and two similar SSGN was stopped because of the financial crisis.

After the tragedy of the Kursk SSGN in August 2000, the Belgorod was planned to replace it. However, it was later decided to finalize the nuclear submarine for other purposes.

The weapons announced by President Vladimir Putin in 2018 were created for a long time. There are reasons for the decision made in early 2000s to use the Belgorod as the carrier of prospective underwater weapons.

The submarine sustained major changes. The hull increased 30 meters due to new compartments. The Belgorod became the longest submarine in the world. The new compartments accommodate various underwater craft, release and let them back.

The Belgorod is the first carrier of the Poseidon strategic unmanned underwater craft. It has to deliver a retaliation nuclear strike at the potential adversary in case it attacks first. The population, major cities and industrial centers are concentrated at the coastline. A powerful nuclear explosion will be devastating and trigger tsunami.

Besides Poseidon, Russia is creating several unmanned underwater craft, including Klavesin-2R-PM. It can engage in research at a depth of 6 thousand meters. It can find surveillance systems on the seabed.

Russia has created Surrogat craft for antisubmarine operations, camouflage and protection of friendly submarines. It imitates a submarine and reproduces its acoustic and magnetic fields. The craft will distract the adversary to dummy targets. The Belgorod is likely to carry the craft.

Russia is designing underwater Garmonia surveillance system. It is a set of rapidly deployed target detection sensors on the seabed. In peacetime, it monitors oil and gas deposits. Garmonia can find alien objects that can damage the drilling rigs. In wartime, Garmonia will fully isolate sea areas where SSBN and Poseidon carriers are on duty.

The Belgorod can also carry nuclear deep-water stations. The miniature subs are designed for a broad range of underwater technical work at major depths, including search for lost military property, detection and installation of various underwater sensors, connection and destruction of communication cables.

The Belgorod can carry a broad range of underwater craft and robots. The engagement of various systems in an armed conflict will provide control over vast sea areas and minimize losses of warships and submarines. It will also guarantee the destruction of hostile weapons and its territory, the Izvestia said.

According to H I Sutton, Belgorod will be one of the largest submarines in the world and will play a key role in building military infrastructure deep under the Arctic as well as carrying the new Poseidon Intercontinental Nuclear-Powered Nuclear-Armed Autonomous Torpedo. She was an unfinished OSCAR-II cruise missile submarine K-139 which is being converted to serve as a Special Missions host submarine. she will be crewed by the Russian Navy but operated under GUGI, the secretive Main Directorate Deep Sea Research organization. In order to conduct covert special missions, it will carry a deep diving midget submarine, large payloads and the new KANYON (Status-6) strategic nuclear torpedo weapon. The project started in 2010, with the refit commencing in 2012, and she was finally launched on 23rd April 2019.