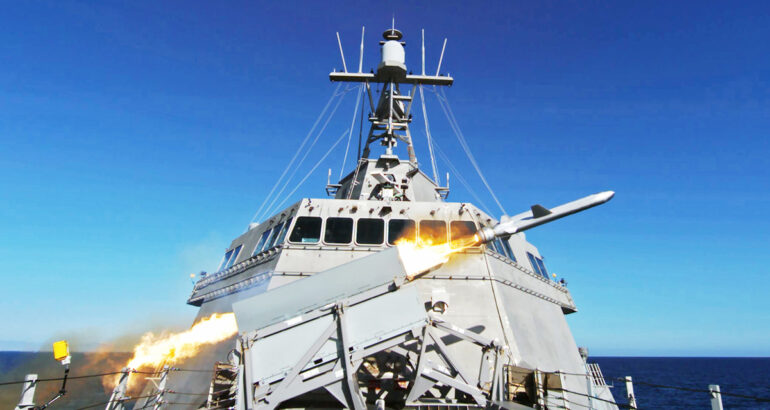 “The recent missile launches were a great accomplishment for Gabrielle Giffords and the LCS community. I am especially proud of Gabrielle Giffords Blue and grateful for Surface Division Eleven’s support to score this win for our Navy.”

The Naval Strike Missile is a long-range, precision strike weapon that flies at sea-skimming altitude, has terrain-following capability and uses an advanced seeker for precise targeting.

“It was an honor to successfully demonstrate our platform’s over-the-horizon lethality and I look forward to the capabilities NSM provides to the fleet,” said Chief Fire Controlman Jason Kloes, lead NSM operator of Gabrielle Giffords’ Blue Crew.

The first test-firing of the NSM from USS Gabrielle Giffords took place in October 2019. The event marked the first time an integrated NSM system was launched from a U.S. Navy LCS.

NSM has an operational range of 185 Km (100 nautical miles) and a high subsonic speed. It uses Inertial, GPS and terrain-reference navigation and imaging infrared homing (with a target database aboard the missile).

The NSM is a fifth generation anti-sip missile, produced by Kongsberg and managed in the U.S. by Raytheon. NSM reached Initial Operational Capability on the new Norwegian Fridtjof Nansen-class frigates and the Norwegian Skjold Class corvettes in 2012. It is also fielded by the Polish Navy (coastal defense batteries) and has been selected by the navies of Malaysia and Germany. NSM was also selected in 2018 as the winner of the U.S. Navy Over-The-Horizon Weapon System (OTH WS) competition and by the USMC in 2019. Its U.S. Navy designation is RGM-184A NSM Block 1.