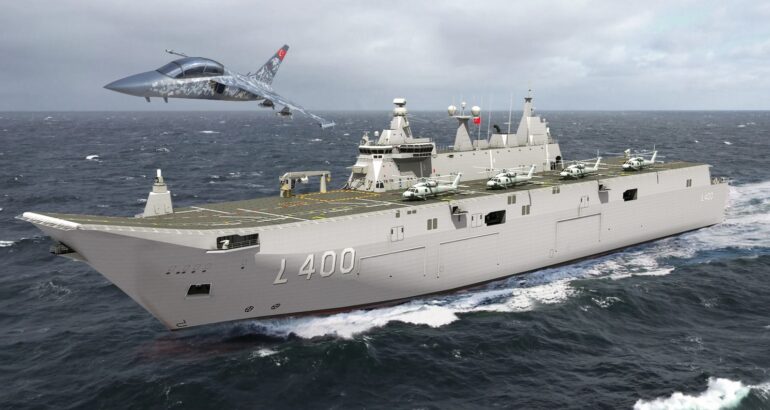 Despite the lack of F-35B, the Turkish Navy may fly manned jets from its Landing Helicopter Dock (LHD) and flagship, the future TCG Anadolu...

A few weeks ago, Turkey’s Head of Defence Industry Presidency, Prof. Ismail Demir, declared that LHD Anadolu is planned to be transformed into a drone carrier which would carry a new attack drone Bayraktar TB-3, derived from the combat-proven TB-2. While the people have been discussing the pros and cons of a “drone-carrier” concept, Mr. Demir announced a new plan of deploying an indigenous aircraft named “Hürjet” on LHD Anadolu last week.

“We have been working on making changes in the design of Hürjet to operate on naval assets. We carried out several designs and made simulations. It has been seen that the design of its current form can evolve in this direction. The studies are also ongoing; the aim is to evolve Hürjet into a shipborne aircraft to operate it from TCG Anadolu.”

After this surprising announcement, the Turkish Aerospace Industries (TAI) Aircraft Programs Manager stated that TAI has been in talks with the Turkish Navy about operating Hürjet on LHD Anadolu, and they plan to make a protocol with the Turkish Navy to keep cooperation on this issues. He also emphasized that the Hürjet can land and take off from a carrier and meet the operational needs of the Turkish Navy. “Several systems would be integrated into the aircraft to make it adaptable with naval assets.” the aircraft program manager added.

Although the Hürjet is planned to be deployed on the LHD, there are some technical difficulties in realizing this project. According to the experts, the Hürjet’s body parts should be strengthened before operating on a ship. Comparing to an aircraft carrier, Anadolu’s flight deck is shorter because it was designed for STOVL (short take-off and vertical landing) aircraft. For this reason, Hürjet may need a catapult system that will provide initial speed to take off. Because of the length of the flight deck, a hook system should be fitted to Anadolu to catch the aircraft while landing. Even if the hook system is fitted to the ship, it is unclear how the aircraft would stop if the hook cannot catch because the length of the flight deck wouldn’t provide enough room for Hürjet to take off again.

Hürjet was initially designed as a jet trainer aircraft, but it could assume combatant roles after fitting with missiles and other munitions. Although it cannot cope with a modern fighter aircraft, it can be used effectively in air-to-surface missions. It has a payload of around 3 tons which provides it to carry and launch indigenous SOM-J air-to-surface missiles and guided-munitions to neutralize adversary surface assets with limited air defense capability. It can also provide ISR assistance to the task group.

Prof. Demir declared at the same interview that they are planning to commission Anadolu in 2022. If the necessary modifications would be fitted, it is possible that the commissioning of LHD Anadolu would be delayed.

The TAI Hürjet is a single-engine, tandem seat, advanced supersonic trainer, and light combat aircraft under development by Turkish Aerospace Industries (TAI). It is expected to fulfill a critical role in modern pilot training through its superior performance characteristics.