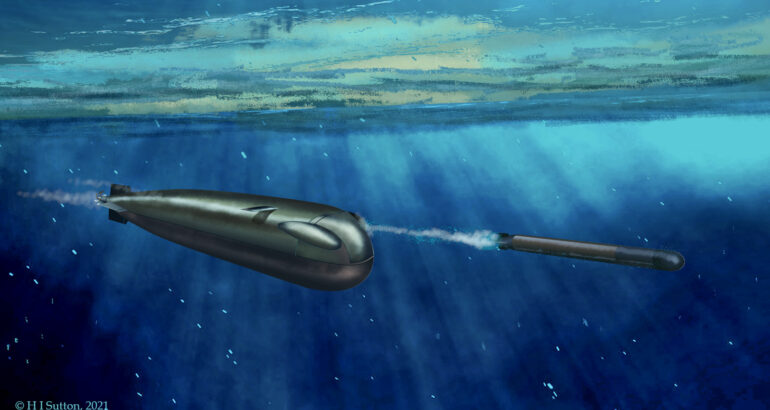 Click to enlarge. An artist's impression of the new submarine, based on the graphic included in a presentation to the Italian Parliament.

Government hearings are sometimes a source of information on sensitive defense deals. Even ones of some magnitude, like the export of submarines. A slide shown to the Italian Parliament's hearing on Defense and Technology Research may give a fresh clue to a secret submarine project.

The world of Italian midget submarine construction is famously secretive. Deals are not talked about in the same way that larger submarine purchases inevitably are. Currently an Italian boatyard is building two small submarines for the Qatari Emiri Navy. That much can be treated as fact, yet few other details are available through traditional reporting. In the absence of details, speculation has been rife. Which company is building them? What will their capabilities be?

Now with careful study of open sources, combined with traditional defense analysis, we can start to paint a picture.

The submarine purchase is part of a wider modernization and expansion of the Qatari Emiri Navy. Qatar has been on a spending spree in Italy for new naval vessels. Fincantieri are building four Doha Class corvettes, plus some patrol boats. A flat-deck amphibious transport dock, similar to Algeria’s Kalaat Beni Abbes class, is also on the cards. But the small submarines will add yet another new capability to this traditionally small navy.

A presentation given to the Italian parliament on May 17 may show the first public images of the new submarines. It was by CABI Cattaneo, a well-established special forces submarine builder. They reported that they are collaborating with another company to build two midget submarines built for a foreign customer. While not explicit, this matches the Qatar deal.

The appearance of the submarine, with a smooth teardrop hull, shoulder-mounted hydroplanes and no sail appears to confirm what some observers suspected. The other Italian company involved must be M23 S.R.L.

In commercial terms M23 S.R.L. is a new submarine builder. Actually, this company is a spin-off of the military business from established submarine builder GSE Trieste. The two companies share a factory in Ciserano, Bergamo, Italy, around 100 miles from the industrial hub of Milan where CABI Cattaneo are based. The submarine shown in CABI Cattaneo’s presentation strongly resembles the unique GSE Trieste lineage.

GSE stands for Giunio Santi Engineering, named after its founder and noted naval architect. The history of Santi’s designs is rich in ingenuity. In the 1980s he was building AIP (air independent propulsion) mini-submarines under the Maritalia brand. Some used a unique tubular construction known as Gaseous Oxygen stored in the Toroidal pressure hull (GST). This consisted of steel pipes formed into a circle and then welded together to form the hull. This was both cheaper and more versatile than traditional construction.

The best known of these subs was the 3GST9. This 9.5 meter (21 ft) long boat, with an almost fish-like appearance, gained a certain amount of attention as a potential Special Forces transport. Today we would call it a Dry Combat Submersible (DCS). Like so many promising designs of that era the end of the Cold War appears to have dashed its prospects.

By the 2000s Santi’s firm, now known as GSE Trieste, was selling luxury minisubs to the mega-rich. They were also designing military types and some of there designs did end up in the peripherals of Navies. Most notable is the Button 5.60 Dry Combat Submersible which was tested by the US Navy. While very compact, potentially small enough to fit inside a Dry Deck Shelter (DDS), it retained Santi’s signature teardrop form with no sail.

This lack of sail may be one of the identifying features of the Qatari submarines. They are likely to look very much like the GSE and Maritalia submarines of the past. They will be incased in a strong plastic outer hull to create a very streamlined form. The shape of the control surfaces, the placement of the hydroplanes high on the shoulders, and clean lines will all bear the Santi trademark.

Specifications for the submarine have not been published. However, it is possible that there is a clue in the company’s name, M23. The new submarine may be 23 meters long (75 ft). The maximum expected size, based on the dimensions of M23’s factory, is about 30 meters (98 ft).

Significantly it appears that these submarines will be armed with at least two torpedoes. Two bumps, one either side of the rounded nose, could not really be anything else.

The submarines are also likely to have a strong Special Forces capability. Between them is a door which may be for a large-diameter payload tube.

The graphic used by CABI Cattaneo should be seen as indicative only of course. It lacks the propeller (screw) and does not show details like masts or access hatches on the deck. In the spirt of secrecy the presentation used publicly available third party illustrations to show some sensitive craft made by the company. I know because I drew some of them. However, the graphic does add up, for the moment it is a stronger hint for the Qatari submarines.

Italian midget submarine builders cannot maintain the level of secrecy which they once did. Modern export documentation, together with an abundance of Open-Source Intelligence (OSINT) will make it virtually impossible. At some point the submarines will have to be transported by road to their port of departure, past masses of camera phones. But, based on the above analysis, we may already know something about these subs.