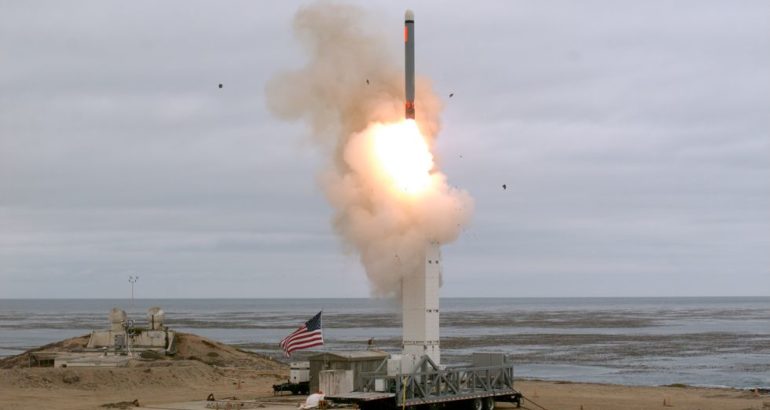 U.S. Marines Experimenting with Tomahawk for Land-Attack and Anti-Ship Missions

Thus, Naval News asked the U.S.M.C. for details on the Tactical Land-Attack Missile (TLAM) R/UGM-109 Tomahawks that the U.S. Marines want to use as Land-based Anti-ship Missiles (LBASM) that can be strategically and tactically placed on ships, shores, and islands to provide the U.S. Marines an organic long-range precision-fired land-based Anti-ship cruise missile with a large warhead powerful and capable of sinking (large) enemy warships. While still in the early research, testing, and development stages, Teresa Ovalle, U.S. Marine Corps’ Combat Development and Integration (CD&I) spokesperson based at Headquarters, Marine Corps, Quantico, Virginia, replied to Naval News’ questions in early June, 2021 regarding how the Tactical Tomahawks will be based, transported, and launched from U.S. Marines on land.

“The Tomahawk is one missile capability that we are experimenting with. The Tomahawk program is funded. We will test different systems in different configurations to ensure we choose how best to employ the missile system.”

“They [the launchers] may be elevated or vertical. Testing and experimentation will show us what [launch method] works best under what circumstances.”

“Tomahawk missiles have the capability to support both roles, but testing and evaluation will help refine how we will employ them as a capability set. Testing and experimentation will help us define what the Tomahawk is capable of in different scenarios. As we learn what is capable, we will refine how best to employ the system [fired from land or from aboard a U.S. Navy ship’s helicopter flight deck].”

Naval News also asked what kind of U.S. Marines’ prime mover truck will be used, and if the Tactical LBASM Tomahawks will be trailer or flatbed truck mounted.

“Testing and experimentation will lead us to [the] right configuration.”

“A Long-Range Fire (LFR) battery is one option that we are considering.”

The Maritime Tomahawk being test-fired in the top photo is from a four-cell MK41 Vertical Launch System that is mounted vertically on a test trailer just as U.S. Navy ships mount their VLS cells. Obviously, this trailer’s fixed vertical VLS configuration will not fit the interior deck height clearances aboard U.S. Navy amphibious ships, but it does validate that four Maritime Tactical Tomahawks can be transported and ready-to-fire from a single trailer, giving the trailer four missiles, each with a 900+ nautical mile range (1,035 miles/1,665 kilometers although the exact range of the Maritime Tomahawk has not been disclosed. TLAMs can fly to approximately 1,500 miles/2,400 km) and a 1,000-pound/453 kilograms warhead. The high subsonic (about 550 mph/885 kph) Maritime Strike Tomahawks will be equipped with a multimode seeker to accurately hunt for moving enemy vessels, but will also retain their land-attack capability for surface targets.

According to the Seapower’s 2019 and 2021 Almanac, the UGM-109 TLAMs have matured through a series of Block upgrades with the Block IV (TLAM-E) utilizing two-way satellite communications that allow for the reprogramming of the missile, or sending the missile on a new mission flightpath, and also allow the TLAM to transmit missile health and status messages during flight in addition to using the GPS and terrain-matching imagery navigation methods. TLAM-Es can also loiter over an area before selecting and engaging the best target. The TLAM Block V improves on the TLAM’s navigation and communications, and Block V production started in 2020. Block IV TLAMs will be recertified and retrofitted after fifteen years in service to be upgraded to Block V variants with the first deliveries in 2020. Production has been robust with the 4,000th Tactical Tomahawk delivered by Raytheon in August of 2017. The U.S. Navy received its first Block V configured Tomahawk missile from Raytheon on March 25 this year.

The Tomahawk missile themselves are not petite, each with a length of 18.3 feet/5.5 meters, and with a rocket booster added, 20.6 feet/6.27 meters and having a diameter of 20.4 inches/51.8 centimeters. Each weighs in at 2,900 pounds/1,315 kilograms, or 3,500 pounds/1,587 kilograms with booster. TLAM warheads range from 1,000-pounds/453 kilograms of high explosives for the TLAM-C/E variants to a dispenser for 166 BLU-97 submunitions in the TLAM-D to the Block VB having a Joint Multiple Effects Warhead System that will enter service in 2024. (In comparison, the Kongsberg Defense, Raytheon Missile Systems’ U.S. Marines’ NMESIS JLTV-launched RGM-184A Naval Strike Missile (NSM) is a stealthy sea-skimming sensor-avoiding Anti-Ship missile with a passive seeker that has automatic target recognition and is resistant to electronic countermeasures. NSMs have a range of 100+ nautical miles (115 miles/185 kilometers), are 12.3 feet/3.74 meters long, and 13.5 inches/34.29 centimeters wide with a 500-pound/226 kilogram high-explosive penetration warhead.

Naval News has obtained some photos from the Defense Visual Information Systems (DVIDS) website showing two to four TLAM canisters aboard a semi tractor-trailer. The photos date back to August, 2013, proving the concept that a trailer can indeed mount, transport, and with the proper engineering modifications, canister elevating mechanisms, and associated missile targeting and fire controls, fire the TLAMs. In theory, the Tactical Tomahawks can be resupplied and reloaded onto the trailers with the proper ammunition handling vehicles, personnel, and time allocated.

While the U.S. Marine Corps did not provide details on the TLAM’s prime mover, pending testing and evaluation results, some of the U.S. Marine Corps’ truck types in current inventory can quality with or without engineering modifications. The Logistic Vehicle System Replacement (LVSR) and the Medium Tactical Vehicle Replacement (MTVR) are “Marine Corps-specific” trucks and tractors that can offer a cab tractor to pull the TLAM trailer or a long cargo truck to carry the TLAM canisters on the rear axles.

The MTVR is air-transportable by U.S. Air Force C-130, C-17, and C-5 cargo planes and can be under-slung by a Marine CH-53 helicopter. With the Oshkosh Defense TerraMax Unmanned Ground Vehicle (UGV) Technology, MTVRs can be made unmanned. Oshkosh’s website states, “The Oshkosh TerraMax UGV technology has proven capable of being seamlessly integrated into convoy operations during live-force military evaluations and has been tested in virtually every manner of tactical environment. Unlike remote-controlled or tele-operated systems, TerraMax UGVs leverage the latest robotics technology that enables them to perceive and navigate complex, off-road environments entirely unmanned, with minimal operator supervision. Oshkosh has the production and support capability to enable the military to quickly transition UGV technology from concept to combat zone.” Similar to the U.S. Marine’s JLTV “ROGUE Fires” NMESIS Naval Strike Missile program, TerraMax UGV MTVRs might be able to transport and fire TLAMs unmanned for increased battlefield survivability, endurance, sustainment, concealment, and distributed lethality and surprise.

The LVSR is transportable by amphibious and commercial ships, rail, and U.S. Air Force C-17 and C-5 cargo planes. Due to the LVSR’s increased size and number of tires and axles (10×10), in theory, LVSRs can transport more Maritime Tomahawks launchers in the ready-to-fire position than a MTVR, but at the expense of tactical weight mobility, concealment, and compactness.

Testing, experimentations, and evaluations will need to be conducted to see if the U.S. Marine Corps’ KC-130J can transport the TLAM launchers when mounted horizontally on trailers or MTVRs and then elevated for firing.

Naval News Staff 03 May 2022
Interviews on the Coastal Defense System protecting Qatar's coastline and territorial waters with the Exocet and Marte anti-ship missiles. 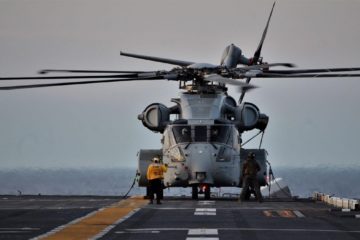