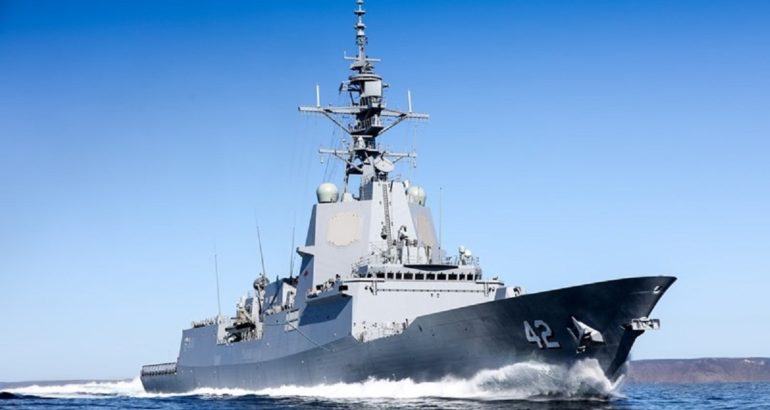 HMAS Sydney, third and final Hobart-class destroyer of the RAN.

HMAS Sydney today returned to Garden Island, Sydney, following a four-and-a-half month deployment to the United States and Canada in which she qualified for operational duty.

While away, the crew of Navy’s third and final Hobart-class destroyer conducted combat system sea qualification trials, including weapons firings off the US west coast and integrated sonar suite trials, sailing from Nanoose Bay, Canada.

Sydney passed the tests and now joins her sister ships Hobart and Brisbane as being ready for operational deployment.

“Our deployment was the culmination of more than a decade of work by Navy in partnership with the Australian shipbuilding industry.”

“Despite the constraints of the pandemic, the crew achieved their mission while maintaining COVID-safe practices, with the support of their families back home.

“They demonstrated resilience and professionalism and showed that while the pandemic continues to shape our navy-to-navy interactions, we can still operate domestically, regionally and globally.

“It was an honour to lead such a dedicated crew and to return to our home port, knowing we have been part of the final check off for such a critical capability.”

Built in Adelaide by the Air Warfare Destroyer Alliance, Hobart, Brisbane and Sydney are equipped with the Aegis combat system, which includes an advanced phased array radar and SM–2 missiles.

The Aegis provides the destroyers with advanced air defence systems capable of engaging aircraft and missiles.

Coupled with its surface and anti-submarine warfare capabilities, the destroyers have layered offensive and defensive systems to counter conventional and asymmetric threats in all spheres of naval warfare.

Before arriving at Garden Island, all personnel completed a 14-day quarantine period at sea and all required pre-arrival COVID-19 tests.

Sydney’s crew will now enjoy some much-needed respite while the ship undergoes a post-deployment maintenance period.

The three Hobart-class destroyers Hobart, Brisbane and Sydney are based on the Navantia designed F100 frigate and is coupled it with the Aegis Combat System. They were constructed in Australia by the Air Warfare Destroyer Alliance.

The Hobart-class provides air defence for accompanying ships in addition to land forces and infrastructure in coastal areas, and for self-protection against missiles and aircraft. The Aegis Combat System incorporating the state-of-the-art phased array radar, AN/SPY 1D(V), in combination with the SM-2 missile, will provide an advanced air defence system capable of engaging enemy aircraft and missiles at ranges in excess of 150km.

The Hobart-class ships carry a MH-60R helicopter for surveillance and response to support key warfare areas. The surface warfare function will include long range anti-ship missiles and a naval gun capable of firing extended range munitions in support of land forces.

They also conduct undersea warfare and be equipped with modern sonar systems, decoys, surface-launched torpedoes and an array of effective close-in defensive weapons.