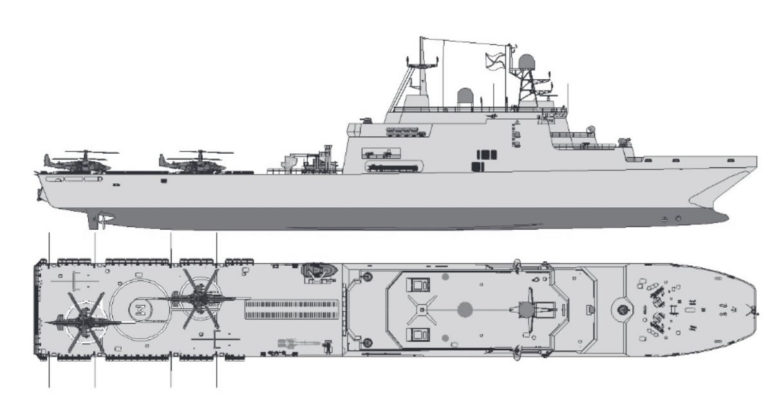 The improved project 11711 landing ship tanks (project 11711) built by the Yantar Shipyard for the Russian have doubled the space and can carry a reinforced marine battalion of 500 men, shipyard CEO Ilya Samarin told the Zvezda TV.

“I believe it can easily accommodate 500 people. There are two upgraded warships so far. They considerably differ from predecessors. The hardware carrying capacity increased 30 percent. Living conditions of the crew and marines have been improved,”

The upgraded warship has doubled the size, but can still sail shallow waters.

“The technical project allows landing assault on unequipped coast. It is a blue-water ship. It can operate in northern latitudes, which is important today,” Samarin said.

The Yantar Shipyard laid the Vladimir Andreev and the Vasily Trushin landing ships of upgraded project 11711 on April 23, 2019. It earlier built the Ivan Gren and the Petr Morgunov warships of project 11711.

These two ships, Vladimir Andreyev and Vasily Trushin, were respectively laid down on the 23rd of April 2019 with an expected commissioning by the Russian navy in 2023 and 2024 respectively. They are an improved version of the first two ships of the class, Ivan Gen and Pyotr Morgunov, which were commissioned in June 2018 and December 2020.

The evolved design features an increased displacement of 7,000 to 8,000 tons compared to the 6,000 of the previous subclass. They will feature a large superstructure to allow for increased deck space. This allows them to accommodate up to four helicopters with the capacity to operate two of them simultaneously.

To allow for all of these increases in capacity and dimensions, the new subclass will be equipped with more powerful engines with four 16D49 diesel engines as opposed to the previous 10D49 model.

These new ships and the Ivan Gren class as a whole, are a central aspect in the modernisation program of the Russan navy’s amphibious fleet. Mainly composed of old assets from the cold war, important efforts have been made in the shipbuilding sector to assure future capabilities