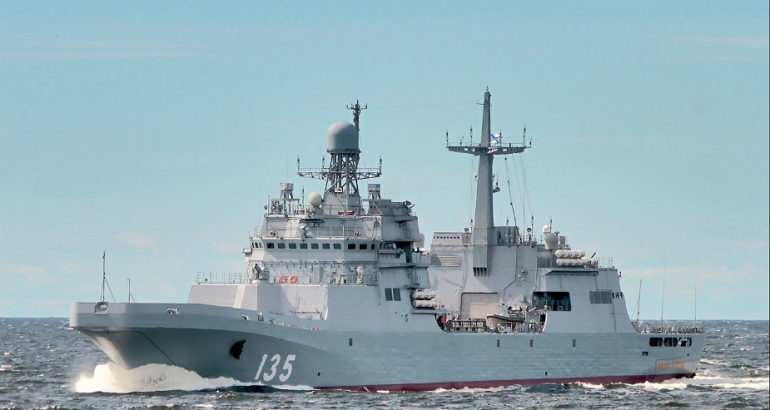 Project 11711 Ivan Gren during trials in the Baltic. Picture by Alex Akentyev.

Russia’s Project 11711 Amphibious Ships can be Used as Minelayers

The Project 11711 large amphibious assault ship can be used as a minelayer that will be able to deny access to any strait zone and a whole offshore zone via sea mines, a source in the shipbuilding industry told TASS.

“Taking into account the capabilities and the size of the Project 11711 large amphibious assault ship, it can accommodate hundreds of sea mines, depending on their functions. This amount is enough to deny access not only to any strait zone but also to large offshore zones,”

It was reported earlier during the Voyennaya Priyomka program on the Zvezda TV channel that amphibious assault ships of the type could be used to lay mines through a stern ramp.

According to the TASS source, all previous-generation amphibious assault ships can be used as minelayers. The Navy currently operates two Project 11711 ships, i.e. the Ivan Gren and Petr Morgunov. Another two ships, the Vladimir Andreyev and the Vasily Trushin, are being built by the Yantar Shipyard under an upgraded project. They will differ from their predecessors by increased operational capabilities and will make up the mainstay of the Navy’s renewed amphibious assault forces.