“The Stingray is the future of naval aviation. It is the first aircraft carrier-based unmanned air vehicle (UAV),” said Rear Adm. John Meier, Commander, Naval Air Force Atlantic. “The ground testing is another step toward the teaming of manned and unmanned aircraft platforms. Integrating platforms like the MQ-25 into the air wing will increase their lethality and reach.”

The MQ-25 Stingray introduces unmanned aerial refueling and intelligence, surveillance and reconnaissance capabilities to the air wing that will extend the range, operational capacity and lethality of the Carrier Air Wing and Carrier Strike Group.

“What we are doing today is deck handling,” said Rick Schramm, the technical lead engineer material review board. “We have a system installed on the airplane that allows the aircraft to be engines up, power running and taxing by controllers on the deck.”

Schramm described that they are using painted lines to section areas of the flight deck to test how the MQ-25 would be able to maneuver on board an aircraft carrier.

The MQ-25 is the first move toward the Navy’s strategic vision of unified, interoperable networks and systems architecture. It is paving the way for future unmanned systems to be introduced to the air wing and aircraft carrier environment.

Chief Aviation Machinist Mate Michael Solle said the UAS capabilities of the MQ-25 will allow the F/A-18 to return to its primary mission set as well as extend its strike range and enhance maneuverability.

The Boeing-owned MQ-25 recently completed its first aerial refueling of an F-35C Lightning II aircraft, marking the third refueling flight evolution for the test aircraft as a whole. Once operational, MQ-25 will refuel every receiver-capable carrier-based aircraft.

The MQ-25 is intended to be one of the Navy’s fastest major defense acquisition programs to reach initial operational capability. 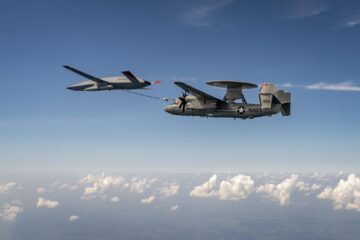