Home» News»MDA Discusses Potential Aegis Ashore Options for Guam
The U.S. Army Corps of Engineers Europe District is managing the construction of a $134 million Aegis Ashore Missile Defense Complex in Deveselu, Romania. [Author’s Note: A potential Aegis Ashore facility in Guam could look very similar or completely different than the one in Romania].

Guam, the United States Defense Department’s small island strategic outpost in the Pacific Ocean is situated approximately 1,900 miles (3,057 kilometers) from Shanghai, China, and 5,800 miles from San Francisco, California, USA. Guam has a large naval base for U.S. Navy warships and submarines and an airfield for U.S. Air Force’s strategic bombers that rotate in and out on deployments and for regional deterrence. Guam itself lacks long-ranged precision fires fixed island defenses (i.e.: missile sites, artillery batteries, and coastal defenses) except for mobile assets either flown or sailed in. For years, Defense analysts have suggested building an Aegis Ashore facility with long-range missiles on Guam to defend the island from incoming ballistic and cruise missiles during any potential peer nation or rogue state conflict.

The area Air Defense issue is that THAAD intercepts “ballistically-arching from space” enemy missiles in the “heavy weight category,” such as the ones shown here, and the Chinese Rocket Forces have no shortage of strategic and tactical missiles with long ranges and large warheads.  THAAD’s Guam placement was envisioned as an interim intercept-response for rogue long-range missiles fired from North Korea as its eight interceptor missiles per 8×8 wheeled HEMTT launcher aren’t enough to counter a determined enemy saturation missile attack.  THAAD is useless and defenseless against small unmanned aerial systems (UAS or drones) because the THAAD missile itself is so huge that its performance characteristics aren’t designed to intercept anything so small and low-flying. The “Iron Dome” launcher with its much smaller, cheaper, and more maneuverable missiles is meant to counter and destroy the small close-in low-level enemy targets such as drones and cruise missiles.  An “Iron Dome” launcher has 20 missiles whereas a THAAD launcher has eight missiles.  (The U.S. Army’s Patriot PAC-3 Surface-to-Air missile launchers were not mentioned as stationed in Guam).

Nonetheless, both the U.S. Army’s THAAD and Iron Dome are purely defensive missiles that launch when an enemy missile attack is already in flight.  These long and short-ranged Army interceptor missiles do not have any offensive striking firepower against enemy warships, submarines, or land-based targets, respectively.  Thus, the need for Aegis Ashore and its Mark 41 Vertical Launch System (VLS) complement of long-range defensive and offensive strike missiles (Standard, ESSM, Tomahawk, LRASM, and Vertical-Launch ASROC) seems a powerful attraction as the Mark 41 VLS cells can house missiles for targeting warplanes, warships, submarines, and “Deep Strike” land targets, or offensive strike missiles. The Mark 41 VLS system comes in eight launcher cells per module so grouped VLS bank configurations of 24, 32, 40, 48, and more VLS cells can be constructed.

Rear Admiral Tom Druggan offered his insights to CSIS regarding why the Mark 41 VLS is so important to area Air Defense and Ballistic Missile Defense (BMD):

“Let’s review the missile portfolio which is our defensive arm. If Aegis is the shield, part of that shield is the missiles. In terms of missiles coming out of VLS tubes, we’ve got, Evolved Sea Sparrow Missile [ESSM, short range], Block 1 and we’ve got a Block 2 coming with an active front end to make it more accurate.
After that, we have SM-2 Block 3A and B [medium range].  The SM-2 Block 3 Charlie is under development; that brings an active front end to make it more accurate. We have an SM-6 with a booster, so this is an extended range missile [21-inch diameter booster, but not a 21-inch missile for long range, extended range].
Then we get to the BMD missiles.  They go into space.  We got the SM-3 Block 1A and B and they’re about the same in terms of range and reach, and then we have the SM-3 Block 2A.  The SM-3 Block 2A, 21-inch all the way, beast of a missile and goes out, a long range. With that missile [SM-3 Block 2A], I’ve extended my defended space 4x [times] because now I can use third-party targeting—and this missile has the legs to do it.”

One can argue that U.S. Navy Aegis-equipped warships currently docked at Guam can provide area Air Defense to the island; however, that notion only works if there are mobile deployed Aegis-radar-equipped warships docked at Guam, and if those warships are properly manned and equipped with the proper Mark 41 VLS defensive missiles during any enemy missile attack.  Another argument is to station decommissioned Aegis-radar equipped Ticonderoga-class warships at Guam for around-the-clock defense coverage, or as a cheaper Aegis Ashore alternative as suggested by TheWarZone. One has to consider the possibility that the analog AN/SPY-1 radars aboard the decades-old decommissioned Navy cruisers aren’t digital, modern enough, and thus no longer state-of-the-art, and therefore cannot deal with the latest high-technological and maneuverable enemy long-range missiles.  This provides even more credence to having Aegis Ashore built on Guam.

Rear Admiral Tom Druggan offered his insights to CSIS regarding constructing Aegis Ashore on Guam.  The host mentioned that having an Aegis Ashore facility (see MDA Deckhouse and VLS graphic) reduces the crew manning, which RADM Druggan confirmed, and releases the Aegis warships from the tether.  RADM Druggan said that to keep an active Aegis warship at one spot all the time takes four to five other Aegis warships to source that one station (rotational warship deployments for maintenance, transit, training, and upgrades similar to a nuclear-powered aircraft carriers’ rotation where one carrier is undergoing maintenance in the shipyard, one is at sea conducting crew training, and one is on overseas deployment, but not all three are deployed overseas). “And that’s a multi-mission [Aegis] ship, and that ship has other jobs that the Combatant Commander would really like that ship to be doing instead of just doing a single mission, for instance, [island] missile defense,” RADM Druggan said.

“Then we get to Guam.  So the first thing is: What’s the mission? Are we denying North Korea? Are we deterring China?  Are we denying China?  So each one of those, you come up with a different set of options to meet that mission.
Aegis is one of the acceptable alternatives when it comes to Guam because we [Aegis Ashore MDA] do BMD, and we have some hypersonic missile defense capability, and we have cruise missile defense capability.  And we do it 360-degrees, and we do it reliably with the right level of firepower…with engage on remote and launch on remote. So that’s a pretty robust integrated air and missile defense capability wherever you want it, ashore, on land…
Then you get to survivability.  Do we want an Aegis Ashore Deckhouse where it’s at a single spot with all the capability in one spot, or do you want to disperse that?  And if you want to disperse some of it, do you want to disperse it, or do you want it mobile in order to increase the survivability?”

“I don’t have an architecture to give you or talk about [regarding Aegis Ashore layouts and setups], but it is coming and there is a rich debate that is fair to finally come up with the solution that we need to go forward with.
The SM-6, fantastic missile, just absolutely great missile, does self-defense, does area defense, does Force-level defense…it is our leading defensive capability for hypersonic missile defense…and we would definitely need that [for Guam].“

Japan moves forward with Aegis equipped ship project. But is it enough?

Yoshihiro Inaba 11 Oct 2021
According to the Japanese Ministry of Defense (MoD)’s budget request for FY2022 announced on August 30, 2021, the budget includes the cost to modify the Lockheed Martin SPY-7 radar in order to operate it at sea... 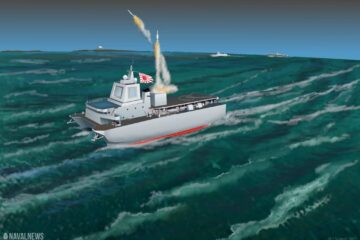 Yoshihiro Inaba 01 May 2021
Japan's Ministry of Defense (MoD) is planning a multihull as one of the proposed designs for the Aegis system equipped ship.