As 2021 comes to an end, here is an overview of the ten most read naval defense news stories we published this past year, based on the number of readers.

As you can see, submarine stories by regular Naval News contributor H I Sutton dominated our top 10 this year. But topics about China’s future aircraft carrier, the Type 003, were by far the most popular among our audience…

5 years after she was commissioned in 2016, the Indian Navy’s INS Arihant remains something of an enigma. Her existence is no secret, in fact it is a proud achievement of Indian industry. But photographs are very few. And nearly all those you will find on the internet are many years old. It is a very secretive submarine program.

Leading Navies are secretive about the full capabilities of their submarines. In a rare privilege, Naval News has been allowed aboard the French Navy’s (Marine Nationale) newest boat, Suffren. Here is what it is like to step inside a next generation nuclear-powered attack submarine.

Ballistic Missile Submarines (SSBNs) form the backbone of nuclear deterrents. Yet the types in service with NATO navies, the U.S., U.K., and France, are reaching the ends of their service lives. The new submarines which are being built to succeed them should keep the deterrent dependable in an uncertain future.

Quantity has a quality all of its own. And when the quality relates to U.S. Navy missiles, having more of them is inevitably a massive increase in capabilities. The latest Block V Virginia Class submarine will greatly increase the number of missiles which can be carried. In effect this will make it a cruise missile submarine (SSGN). Yet it will not take away from this otherwise flexible anti-ship, anti-submarine, intelligence and special forces platform.

[This was our 2021 April Fools day story] The new submarine, identified as the Type-100 Class, is armed with 48 Submarine Launched Ballistic Missiles (SLBMs). It can also carry ginormous nuclear-powered nuclear-armed autonomous torpedoes. And a hangar on its back indicates a smaller submarine will also be supported. There is no doubt that this is the new god of submarines.

The Royal Navy’s new Dreadnought Class submarine promises to be the stealthiest yet. The first two boats, HMS Dreadnought and HMS Valiant, are already under construction. They are destined to take over Britain’s nuclear deterrent from the 2030s. They incorporate significant changes in the design compared to other types.

Belgorod will bring new capabilities to the Russian Navy. To be operated on behalf of the secretive Main Directorate of Undersea Research (GUGI), the submarine may be central to Russia’s intelligence gathering capabilities. Yet she also carries a new strategic weapon, known as Poseidon.

The Chinese Navy is radically modernizing its capabilities. Chief among these are a fleet of aircraft carriers. A new satellite image clearly shows the Type-003 aircraft carrier taking shape in Shanghai, and it is the largest so far.

A new aircraft carrier, currently under construction in Shanghai, is the most visible sign of China’s rapidly expanding navy. It is larger than China’s current two carriers and differs in key aspects. But the natural comparison is to the U.S. Navy’s latest carriers, the Ford Class.

Aircraft carriers are at the vanguard of China’s incredible naval expansion A new, larger super-carrier is being built near Shanghai. Analysis of radar satellite imagery shows that it is as large as China’s new bases allow.

Xavier Vavasseur 30 Dec 2021
As 2021 comes to an end, here is an overview of the five most watched videos we produced this past year, based on the number of views.

Xavier Vavasseur 31 Dec 2020
As 2020 came to an end, here is an overview of the ten most read naval defense news stories we published this past year, based on the number of readers. 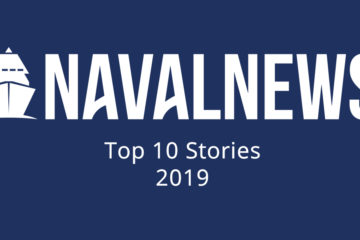 Xavier Vavasseur 02 Jan 2020
As 2019 came to an end, here is an overview of the top ten naval defense articles we published this past year, based on the number of readers for each story.