The Pakistan Navy held a steel cutting ceremony for the fifth Hangor-class submarine at the Karachi shipyard on December 9, according to the Pakistan Navy's official social media accounts.

Commemorating the Golden Jubilee of HANGOR Day, steel cutting of the 5th HANGOR-class Submarine, the first to be built indigenously in Pakistan, was also held at Karachi Shipyard and Engineering Works (KS&EW).

The in making HANGOR Class Submarine is capable to undertake war and peacetime roles as per Maritime dictates. The Submarine possesses advanced stealth features to operate under a multi-threat environment and its state-of-the-art sensors are integrated with Command & Control system which can simultaneously track engage several targets at standoff ranges.

The Submarine would be named PNS TASNIM upon commissioning, in honor of ex-PNS HANGOR crew led by Vice Admiral (Retd) Ahmad Tasnim. On the occasion of the Steel cutting ceremony, the Chief of the Naval Staff expressed gratitude to all involved in construction activities and termed the occasion as another event of deepening relation between Pakistan and China. The Steel Cutting ceremony was attended by representatives of DA China and other high-ranking officials including distinguished guests from the Embassy of China in Islamabad, MoDP, Pakistan Navy, and KS&EW.

Besides, a submarine seminar on ‘Technological Advent In Artificial Intelligence: Impact On Sub-Surface Domain’ was also held at Jauhar Auditorium Karachi, highlighting the shape of PN submarine force over the next decade after induction of 8 x HANGOR class submarines and SWATs.

The Hangor-class submarines are an export variant of the PLAN’s Type 039A/041 Yuan-class submarines. Pakistan accepted the purchase of eight submarines from China in April 2015. According to the agreement, four of the submarines will be built in Pakistan’s KSEW at the same time as the other four would be produced in China.

The eight boats are scheduled to be delivered between 2022 and 2028. The Chief Director of the program revealed in August 2016 that the first four of these submarines will be delivered in 2022-2023, with the final four following in 2028.

The Pakistan Navy does not offer any details about the Hangor-class submarines’ subsystems or specific weapon systems. The Stirling AIP system is used in China Shipbuilding and Offshore International Company’s (CSOC) S26 design, on which many experts assume the Hangor is based, but Pakistani officials have not publicly revealed the propulsion system of Hangor-class subs.

According to the Pakistani defense blog Quwa, Hangor-class submarines will be 76 meters long and have a displacement of 2800 tons, making them slightly shorter but heavier than the original S26 design.

Currently, PN operates three Agosta 90B air-independent propulsion (AIP) submarines and two Agosta 70 diesel-electric submarines. Three Agosta 90B subs have been undergoing a mid-life upgrade under a contract signed in 2016 with the Turkish STM Company as the prime contractor. STM delivered the first upgraded submarine, PNS Hamza, in 2020. The scope of modernisation is the replacement of the Fire Control System, Sonar Suite, Electronic Warfare System, Radar and Periscope System (Navigation and Assault).

The eight Hangor Class submarines will significantly strengthen the Pakistan Navy. Pakistan is likely to improve its A2/AD capabilities in the region after the project is completed. Though no official confirmation has been made on the weapon systems, it is clear that Pakistan would obtain deep strike capability if the Hangor-class submarines were outfitted with Babur-3 SLCMs. 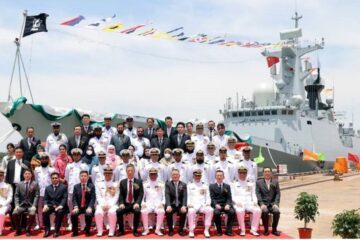