The Type-055 Renhai Class is in many ways the Chinese Navy's (PLAN) answer to the U.S. Navy's AEGIS cruisers. Large and heavily armed, they play a leading role escorting China's aircraft carriers. New intelligence suggests that another batch of these impressive warships is being built.

With 8 ships already in the water, the Chinese Navy’s Type-055 Renhai Class cruiser is making waves. It is undoubtedly the most impressive surface combatant in the PLAN (Chinese Navy) line-up, making it a natural focus of observers. New intelligence suggests that at least two more are under construction in Dalian, China.

The first Type-055, Nanchang (101), was launched in June 2017. Since then 7 more have been built at Dalian and Shanghai. At 13,000t they are the largest surface combatants currently under construction in the world. This makes then about a quarter bigger again than the U.S. Navy’s AEGIS cruisers.

20 years ago Chinese warships were far behind their Western, and Russian, counterparts. While America was building AEGIS-equipped air defense destroyers, Chinese ships only had short range missiles. Now the Type-055 is, at least in general terms, comparable to the U.S. Navy’s Ticonderoga Class AEGIS cruisers.

That started to change in the 2000s with a succession of increasingly modern Chinese ships. These included the Type-052C Luyang-II Class which was seen as China’s answer to the AEGIS destroyer. The Type-052 family quickly became the Type-052D Luyang-III model which boasts the Type-346A phased array radar. Unlike the American AN/SPY-1 this has Active Electronically Scanned Arrays (AESA) instead of Passive (PESA).

The Type-055 has the latest Type-346B version of these system. How it compares, in combat terms, to AEGIS is not public. What is clear however is that the Chinese system is maturing and appears to have been steadily improved. It is thought to provide Chinese commanders with similar levels of awareness.

The advanced radar systems are combined with universal vertical launch systems (VLS) which can carry an array of weapons. Missiles for air defense, anti-submarine and ant-surface warfare. The Type-055’s VLS has fewer cells than the Ticonderoga Class (112 versus 122), but they are larger and deeper. The weapons load-out is actually quite different though. This likely reflects different needs and priorities more than technological capabilities.

The main air defense missiles are at least analogous. The Chinese HHQ-9 missile, heavily influenced by the Russian S-300 system, performs a similar role to the Standard family of missiles. The U.S. Navy ships also carry the ESSM shorter-ranged air defense missile. These can be quad-packed into a single cell of the VLS. These Chinese ships are not thought to have an equivalent missile, although they do have a 24-round HHQ-10 short-range system. Both ships have close-in weapons systems (CIWS).

The Chinese ships place a greater emphasis on anti-surface warfare. For this they can carry the YJ-18 long-ranged supersonic anti-ship missile. These large, modern, missiles contrast with the Harpoons carried by the Ticonderoga Class. A maximum of 8 Harpoons can be carried, but the Chinese ships can carry many more YJ-18s.

Meanwhile the Ticonderoga Class carry the highly successful Tomahawk land-attack cruise missile (LACM). It is unclear whether the Type-055 has a comparable LACM, although possibly the YJ-18 can also perform this role. China now has so many cruise missile types in service that, if the Type-055 doesn’t have a LACM capability, it is down to doctrine.

An even great divergence in weapons is in the anti-ballistic missile (ABM) arena. U.S. AEGIS ships can be equipped with the RIM-161 SM-3 missile which can intercept medium range ballistic missiles. China is not thought to field an equivalent system.

For China’s part, there is an expectation that the Type-055s will receive anti-ship ballistic missiles (ASBMs) in the future. This may require some modifications, although the VLS aboard these ships is already quite large.

Perhaps the biggest difference between the Chinese and American cruisers is age. The Type-055, in both appearance and design terms, is a generation or more newer. Its angled lines and clean superstructure contrast with the Ticonderoga Classes boxy complexion. We should not judge ships combat effectiveness on looks. But the difference points to the truth that the American ships are getting long in the tooth.

Now approaching 40 years in age, the remaining Ticonderoga Class will start to be decommissioned in the next few years. The current oldest hull, USS Bunker Hill, will be retired next year, its life already extended by several years. These ships will not be replaced by a cruiser design. Instead, they will give way to the latest, and most cable, variants of the Arleigh Burke Class destroyer.

The latest flight-III Arleigh Burke Class destroyers are more modern than the Ticonderoga Class. But they are still a much older base design than the Type-055, going back to the 1980s. They are also still smaller than the Chinese ships, and have fewer VLS cells. This doesn’t necessarily make them worse of course. In many ways it is more similar to the Chinese ship.

The key takeaway is that there is even a discussion on the pros and cons of the relative designs. 20 years ago it was a no-contest. Now Chinese warships are impressive enough to have the conversation.

It remains to be seen whether the latest Type-055s (if that is indeed what we are seeing in Dalian) will be significantly different to the first 8. Possibly with ASBMs, or other new capabilities.

H I Sutton 29 Dec 2021
When a Chinese submarine entered the Malacca Strait on December 20, heading towards the Indian ... 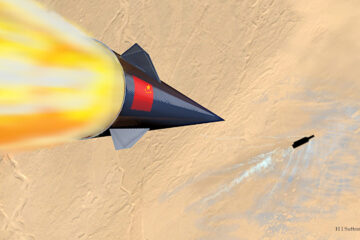