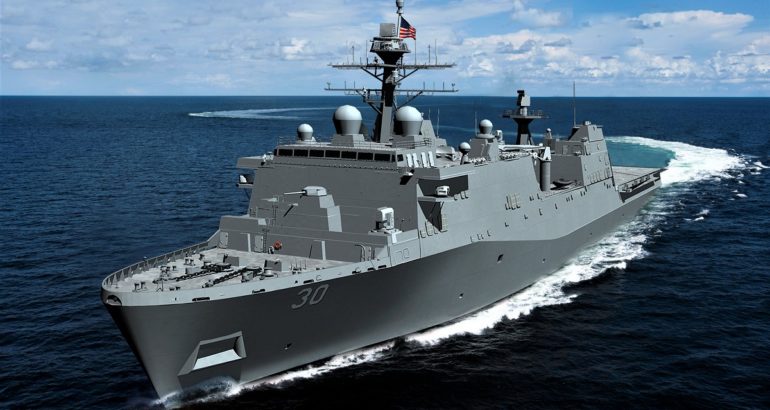 A keel-laying is the recognition of the start of a ship’s construction. It is the joining together of a ship’s modular components and the authentication or etching of an honoree’s initials into a ceremonial keel plate. The ship’s sponsor, Alexandra Curry, wife of Middletown, Pennsylvania, Mayor Jim Curry, had her initials etched into the keel plate by HII welders.

“LPD 30 marks the beginning of the LPD Flight II builds and the continuation of the superb capability that the San Antonio Class platform has brought to the Navy-Marine Corps team. With its flexibility and adaptability, LPD Flight II ships are essential to projecting power and delivering the combat capability needed to shape the future fleet.”

The city of Harrisburg, Pennsylvania, and her surrounding region plays a central role in our national defense infrastructure, hosting a myriad of defense logistics and naval supply support activities that bring support and sustenance to our Navy’s fleet and our forward-deployed Sailors and Marines. This is the second U.S. Navy ship to be named after the city of Harrisburg. The first was a troopship acquired during World War I.

The LPD Flight II ships will be the functional replacement for the Whidbey Island Class (LSD 41/49). The San Antonio-class is designed to support embarking, transporting, and landing Marines and their equipment by conventional or air-cushioned landing craft. The ship’s capabilities are further enhanced by its flight deck and hangar, enabling the ship to operate a variety of Marine Corps helicopters and the Osprey tilt-rotor aircraft (MV-22). Because of the ships’ inherent capabilities, they are able to support a variety of amphibious assaults, special operations, expeditionary warfare, or disaster relief missions, operating independently or as part of Amphibious Readiness Groups (ARGs), Expeditionary Strike Groups, or Joint Task Forces.

HII’s Ingalls Shipbuilding Division is currently in production of the future USS Richard S. McCool (LPD 29) and the future USS Fort Lauderdale (LPD 29). LPD 28 and 29 will serve as transition ships to LPD 30. 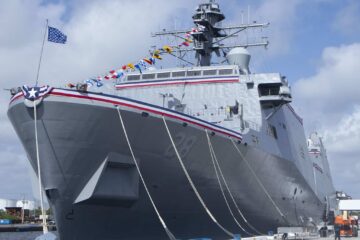 Naval News Staff 31 Jul 2022
U.S. Navy press release “To the Sailors and Marines who will serve aboard USS Fort ...