Unseenlabs, the European leader in satellite-based radio frequency (RF) geolocation of ships at sea, has successfully deployed BRO-5, the fifth satellite in its fleet.

Unseenlabs constellation has now 5 satellites dedicated to maritime surveillance, the most developed constellation in the field of RF detection from Space.

Rennes, 14th January 2022 – This fifth deployment marks another step towards the goal of 20 to 25 satellites in orbit for the European leader in satellite-based geolocation of ships at sea by 2025. On Thursday, 13th January, at 15:25 UTC, SpaceX’s launch vehicle put BRO-5 (Breizh Reconnaissance Orbiter-5) into orbit at an altitude of 550 kilometers via the SpaceX Transporter-3 mission on Falcon 9 launcher.

This fifth launch is a real affirmation of the durability of the Unseenlabs constellation and allows the European leader to further expand its services internationally, in part by reducing its revisit time at each launch. This success enables the French company to start the year 2022 by continuing its growth and innovation through the increase of its service quality.

This fifth deployment, the second in just five months, is a demonstration of Unseenlabs’ expansion dynamic. It is part of the French space strategy, within the France 2030 plan, mentioned by Bruno Le Maire, Minister of Economy, Finance and Recovery, last December.

A pioneering company in the French newspace industry since 2015, Unseenlabs deployed its first nanosatellite in August 2019. From then on, the company was able to provide RF geolocation data of ships at sea to its customers. In April 2021, Unseenlabs announced a €27 million fundraising round to continue its growth. 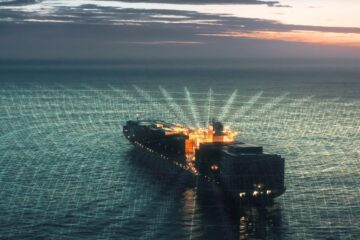 Naval News Staff 18 Feb 2022
Since early November, more and more vessels navigating in Chinese waters are disappearing from the tracking systems normally used in maritime transport, likely following the introduction of the new Chinese law on the protection of personal information, which came into effect last 1st November.