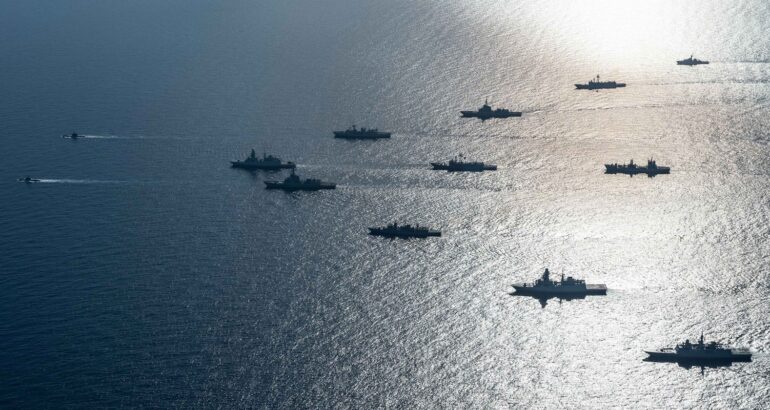 Yearly planned and conducted by NATO Allied Maritime Command – MARCOM in the Central Mediterranean off Sicily eastern coasts, the aim of Dynamic Manta is to provide all participants with complex and challenging warfare training to enhance their interoperability and proficiency in anti-submarine and anti-surface warfare disciplines while maintaining focus on safety.

“NATO’s maritime power lies in the ability of the Standing Forces to rapidly join with high readiness, high capacity national forces to deliver effects when and where needed. Exercises like this, along with regular training between Allied navy units and our multinational Standing Naval Forces, is a force multiplier that provides a collectively trained and interoperable force, ready to work together as the maritime portion of the VJTF [Very High Joint Readiness Task Force]”.

“This exercise is a visible demonstration of the Alliance’s ability to cooperate and effectively integrate…….Alliance unity, solidarity, and cohesion are the core of NATO,” said RADM Mack.

Rear Admiral Mauro Panebianco, Commanding Officer of SNMG 2, who is heading the exercise this year said:

“Submarines from France, Greece, and Italy under NATO Submarine Command are joining surface ships from Canada, France, Greece, Italy, Spain, Turkey, and the US for a total of 3 submarines, 12 ships, 8 maritime patrol aircraft, and 8 ASW helicopters”

According to a provided list of participating assets and released images, DYMA 2022 sees the involvement of an Italian Navy’s Todaro-class U212A boat, Greek Navy’s Papanikolis class Type 214 boat, and an unidentified French Navy’s nuclear attack submarine, although no official information was released about boat types.

“As the host Nation, Italy is providing support in the Catania harbor, naval helicopter base in Catania, naval air station in Sigonella and Trapani airbase, as well as logistic support from Augusta naval base”, continued RADM Panebianco.

“Thanks to DYMA22, each surface ship will have the opportunity to conduct a variety of submarine warfare operations. The submarines will take turns hunting and being hunted, closely coordinating their efforts with the air and surface participants”, Panebianco explained.

“Keeping the Alliance strong and ready is nowadays more important than it was ever. Dynamic Manta 22 provides an outstanding occasion for SNMG2 to operate again in a wide multinational environment, after the very good activity “Neptune Strike 22” carried out in the Adriatic Sea together CSG-8 and Italian Carrier Group Cavour under the C2 of STRIKFORNATO, again in a wide multinational environment”, added the Italian officer.

“Anti-submarine warfare is a highly asset-intensive process that involves significant numbers of highly capable platforms deploying a variety of sensors that requires trained and skilled human operators. DYMA22 is designed to provide advanced training for participating units, sharpen their ASW skills, and to give the opportunity to practice and share new tactics and methods to enhance interoperability”

“As Commander of Italian Submarine Forces, I am aware of the threat’s evolution and the need to ensure surveillance and control abilities of underwater spaces beyond the existing national and NATO capabilities. Foreseeable scenarios will see ASW operations to be sided by underwater operations to protect energy and data infrastructures”, explained the Italian officer.

“Those considerations have implied for Italy to proceed to the construction of the Italian U212 Near Future Submarine, which saw last January the start of production for the first of the new series of boats. NFS represents an evolution of the “well-tested” four U212A submarines but it won’t be a traditional boat since it is designed to be as a “system of systems” able to communicate and act in synergy with networks of acoustic sensors and underwater drones. Stealthness, long-range effectiveness, and supremacy in the underwater environment will be its operational peculiarities, but the development path will also focus on disruptive technologies”, highlighted RADM Lacerenza, elaborating on the development of Italian Submarine Forces.