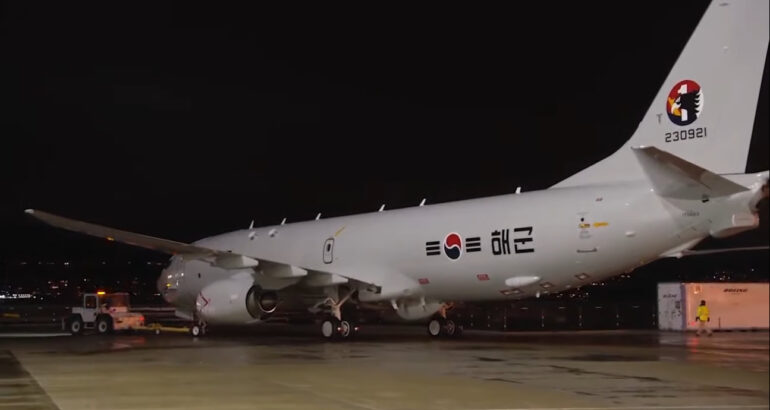 On February 3rd, Boeing released a video of the P-8A for the ROK Navy, which was captured at its factory in Washington state. Six P-8As are expected to be delivered to the Korean Navy from this summer to 2023, after it was chosen as the next multi-mission maritime aircraft and the US State Department approved FMS (Foreign Military Sales) of six P-8As to South Korea in September 2018 for an estimated 2.1 billion USD.

The ‘P-8 Poseidon,’ also known as the “submarine killer”, is an anti-submarine patrol aircraft developed by Boeing in 2009 based on its B737-800 aircraft. It is equipped with 129 sonobuoys that detect underwater activities of hostile submarines, as well as offensive weapons such as the Harpoon air-to-surface missile and torpedoes.

The US Navy’s P-8A has a long-range X-band radar AN/APY-10 that detects maritime enemy targets within 470 kilometers, as well as surveillance and patrol assets such as a digital electronic optic/infrared (EO/IR) sensor L-2 Wescam MX-20HD that films targets from tens of kilometers away in high resolution, and several electronic warfare equipment.

Once the ROK Navy receives the new six P-8A aircraft from Boeing, the ROK Navy will have a total of 22 operable maritime patrol aircraft, including the eight P-3Cs and eight P-3CKs currently in service. In 2030, these P-3Cs and P-3CKs will be replaced by new aircraft.