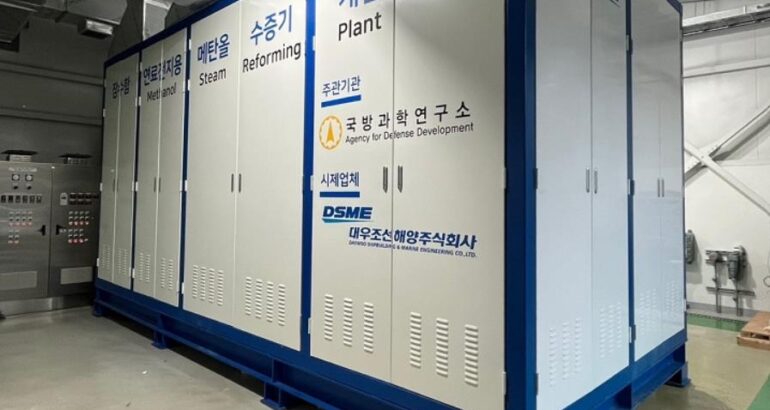 The technology developed by ADD will allow submarines that use AIP to produce high-purity hydrogen, allowing them to stay underwater for longer periods of time.

Submarines that are currently operated by the Republic of Korea Navy (ROKN) are equipped with high-efficiency fuel cell AIP and use high-purity hydrogen as fuel which allows them to stay submerged for long periods of time. However, the storage alloy used to store hydrogen fuel has relatively low storage capacity, can only be charged using facilities specifically designed for hydrogen fuel, and takes a long period of time to charge.

According to ADD, the use of “methanol-reforming plant technology”, which transforms methanol into hydrogen by altering its chemical structure, negates the need for separate charging facilities and decreases charging times significantly, in addition to allowing the submarine to operate submerged for longer.

“This technology will contribute significantly to increasing the capabilities of domestically produced submarines. The technology can also be used for the development of fuel cells for civilian ships and industrial purposes, playing an important role in the growth of the ‘hydrogen-powered economy’,”

The development follows Daewoo Shipbuilding & Marine Engineering (DSME)’s delivery of its prototype methanol reforming plant technology to ADD last November. It is likely that ADD made the technology ready for use by refining it even further.

“The company has proven its world-class technological competitiveness in this field by carrying out this research project,” DSME Research Institute Director Choi Dong-gyu said in a statement released at the time.

The first submarines to feature this new technology will likely be the KSS III Batch 2.