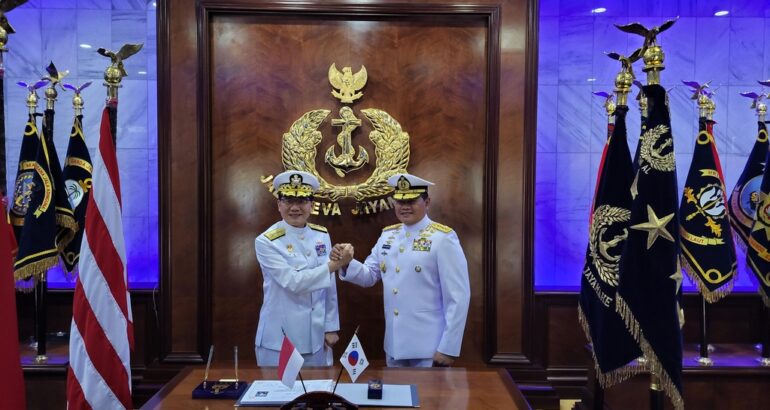 The flag officers discussed topics of interest to both parties, including Indonesia’s submarine program, and came to a mutual understanding that “military and defense acquisition-related cooperation” between the two countries was “necessary".

“Indonesia is a country of great interest in regards to defense cooperation and achieving the aims of our ‘new southern policy.
Indonesia, located in between the Indian and Pacific Ocean, is the leader of ASEAN and is geographically very important.” Kim continued, “Both President Moon and President Joko Widodo have presented their respective visions for turning their nation into a leading naval power…Given this, we need to continue building mutual trust.”

Admiral Kim also broached the Indonesian order for a second batch of submarines from Daewoo Shipbuilding & Marine Engineering (DSME). The program to deliver the three submarines of the second batch has been in limbo for three years, with Indonesia refusing to make the down payment necessary for deliveries to officially begin. Earlier this month, Indonesia ordered 42 Rafale fighter aircraft from France and signed a memorandum of understanding regarding the cooperation between shipbuilders for the production of 2 Scorpène-class submarines, leading to fears that the program could be canceled altogether in South Korea.

“It is ultimately up to DSME to bring this program to fruition. However, the South Korean government is also doing everything it can to support DSME,” Admiral Kim said. After meeting with Indonesia’s military top brass, Kim visited a shipyard operated by PT PAL Indonesia, further emphasizing the importance of DSME’s submarine program. Ten technicians from DSME are currently working at the shipyard in order to perform maintenance on the three submarines the company delivered as part of the first batch.

According to the head of the ROKN, Indonesia requested South Korean help regarding the operation of submarines, including the training of crews, maintenance, and technology transfers. One of the ideas brought up was increasing cooperation between the two countries’ naval academies. Admiral Kim also said that an Indonesian delegation has already inspected the retired corvette which will be gifted to Indonesia.