On February 1, U.S. Secretary of Defense Lloyd J. Austin III called Crown Prince Mohammed Bin Zayed Al Nahyan of the UAE to express his support for the UAE after the Houthi attacks on Emirati territory and threats made against U.S and Emirati armed forces at Al Dhafra Air Base. During this call, the secretary expressed his intention to send a destroyer and fighters to help defend the UAE.

This last call took place after U.S. military personnel responded to an inbound missile threat at Al Dhafra Air Base in the UAE. Those are not new. Indeed, the United Arabs Emirates are facing reguraly attacks – attributed to Houtis – on its territory. The UAE suffered its third missile attack in consecutive weeks on January 31.

To show strong support from the U.S. to the UAE, the Secretary reviewed a range of actions the Department of Defense is taking.

For the record, USS Cole has a special relation with the Middle-East, and especially with Yemen. Indeed on October 12, 2000, USS Cole was hit by a suicide attack killing 17 sailors and injuring 39 others during a port call in Aden (Yemen). 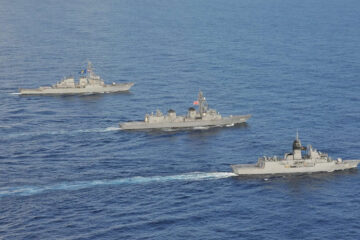